By Vicki Garside of Make Time To See The World

Tana Toraja is a region of South Sulawesi in Indonesia, a picturesque mountainous region that is home to an indigenous group known as the Torajans.

For the Torajans, the most important thing about life is death; and because of this, they have established some of the most unique and complex burial rituals in the world, which continue to be practiced today. But don’t worry, this article — although it may appear somewhat dark (and potentially gruesome and/or shocking) for some people, is not in the least bit morbid, as these Toraja Death Rituals are one of the biggest celebrations of life you will ever read about.

The Toraja Death Rituals are #Indonesia are one of biggest #celebrations of life you'll ever experience. #travel #Asia Click To Tweet

The Torajans work hard in life to amass wealth for their death, with elaborate funeral rites seen as the ultimate symbol of wealth and prosperity to those both inside and outside the community.

The biggest and most lavish festivities are reserved for those of noble standing within the community, with the last “pure blooded Torajan noble” buried in 1972, an event which was documented by National Geographic.

What Happens When A Torajan Dies?

The Care of the Body

The Torajans believe that death is not instantaneous; but rather it can take months — or even years — for a person to fully pass over to Puya (the afterlife). This can only occur after the body is buried.

Until the time of burial the deceased body is kept in the family home, and thought of as a Makula (sick person).

In order to prevent the body from decaying and putrefying, it was traditionally wrapped in blankets and preserved with herbal elixirs and smoldering fires. This has largely died out and the bodies are now preserved with formalin (formaldehyde and water) injections, which eventually results in mummification.

The body is kept in a room at the back of the family home — facing south where the Torajans believe heaven is located — and is tended to by family members almost around the clock for months or years whilst they prepare financially and emotionally for the funeral.

Each day family members visit the body, talk to it and bring it food and drink up to 4 times a day. The Torajans do this out of great respect for the deceased on the premise that although the person is “Makula,” their soul remains in the house. Moreover, while they are in the house they continue to remain a part of the family. Visitors to the house will be introduced to the deceased and great care will be taken to include them in household life. 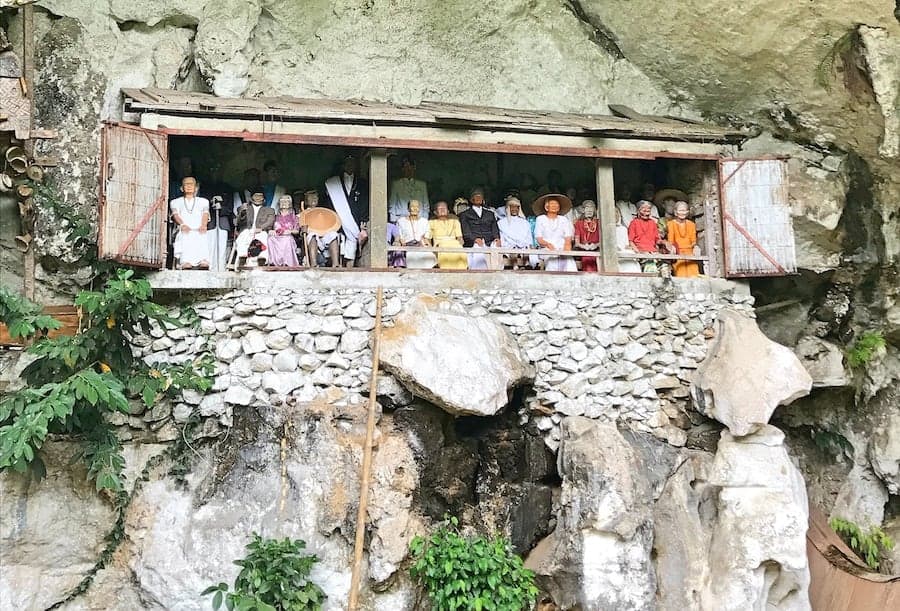 Tau Tau – wooden or jackwood carved effigies of the deceased

A Tau Tau is a carved wooden or bamboo effigy of the deceased that is usually commissioned upon a person’s death. “Tau” translates as “man,” and so Tau Tau translates to “men” or “statue.”

Traditionally, they were only carved to reveal the gender of their subject; but they have become more and more extravagant, and a likeness to the deceased is now expected, as is being dressed in an outfit formerly owned by the deceased.

At a cost of over $1,500, they are an extravagance usually reserved for those with higher societal standing.

Once created, the Tau Tau remains with the body and is transferred to a lookout above the cave grave entrance at the time of burial. The Tau Tau are thought to protect the deceased and watch over the living. 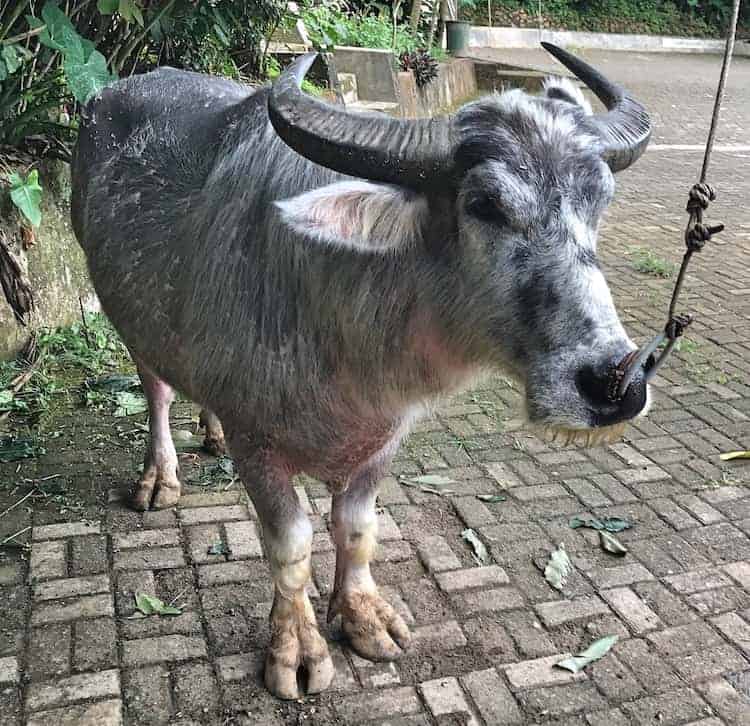 The wealth of the deceased will dictate the extravagance of the funeral ceremony, and families can take years to amass the wealth and sacrificial animals required before it can be performed. A minimum of six water buffalo — at over 100 Million Rupiah (~$7,000 USD) each — are sacrificed at a Torajan funeral. That being said, it can be as many as 100 buffalo for those thought of as noble people with high standing in society.

Torajans believe that the buffalo help take the deceased to Puya. The more buffalo, the quicker the journey. They are slaughtered by having their throat cut to release the spirit, and the horns are removed to decorate the front of the deceased family’s home.

Guests to the funeral often also arrive with a pig or buffalo to be sacrificed as a gift to the deceased relatives. These donations are meticulously recorded in order to be repaid at a later date when a member of that family dies. Until such time, there is a unseverable bond between the families.

A cockfight or bulangan londong is also an integral part of the ceremony. As with the sacrifice of the buffalo and the pigs, the cockfight is considered sacred because it involves the spilling of blood on the earth. Officially, the tradition requires the sacrifice of at least three chickens, but it is common for 25 pairs of chickens to be set against each other, as part of the ceremony.

The Rambu Solo is the official name of the funeral ceremony (also known as the Death Perfection Ceremony). Typically, it takes place in the dry season between the months of June and September each year.

It’s carried out either outside the Tongkoran (traditional house) in the village, or in a field (the ceremonial site is known as rante) where bamboo structures are erected for friends and family to watch the festivities from. It is at this time when there is lots of wailing, crying, dancing and singing, when the animals are ritually sacrificed, and the cockfights occur.

The meat from the animals is eaten as part of the death feast, with the extra meat split between the attending families to take home.

Although the aluk religion — the way of the ancestors — states that only a noble person should be celebrated with a death feast, it has become an integral part of all funeral ceremonies, with the exception of ceremonies for children and low-status adults.

These festivities can run from two days up to two weeks depending on the status of the deceased.

After this, the body is placed in ceremonial palaquin (which is the shape of a traditional house, Tongkoran) and carried by many men —  accompanied by members of the village —  to the burial site behind a procession known as Ma’Palao/Ma’Pasonglo. 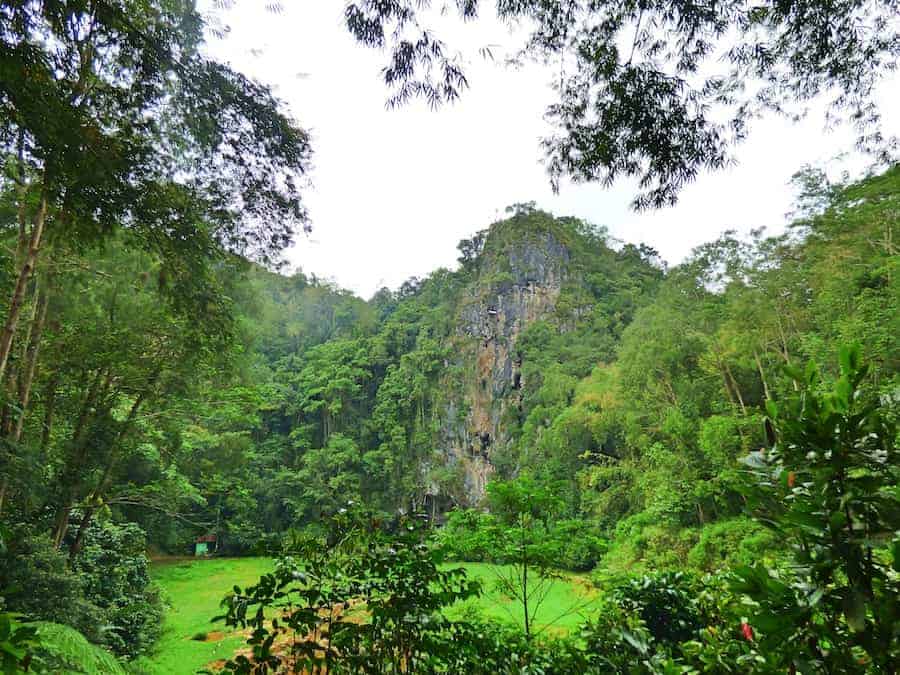 This is the cave burial site of Londa – and if you look closely you can just make out the coffin hanging from just above the center of the cliff side.

The deceased are traditionally buried in a hollowed out cliffside grave that are sometimes as high as 30 meters (100 feet) off the ground. These caves have been hollowed by specialists, who carried out the work without the use of harnesses or safety nets, in exchange for very little pay or, sometimes, a couple of buffalo.

Generally, the higher up the body is buried, the higher the deceased status in society. You might also find people whom had been buried with symbols of their wealth such as gold to discourage grave robbers.

This sometimes includes hanging the coffin from the side of the cliff, where it remains until the ropes snap or the coffin disintegrates and the remains fall to the ground.

The Torajans of #Indonesia never bury their dead below ground. Here's why! #Indonesia #culture Click To Tweet

Generally speaking, the lower your status in the family, the lower in the cave you’re buried; but, it’s always above ground. This is because the Torajans believe that the earth represents the mother — who gives life through the land — and to bury bodies in the ground would, in essence, defile that purity. 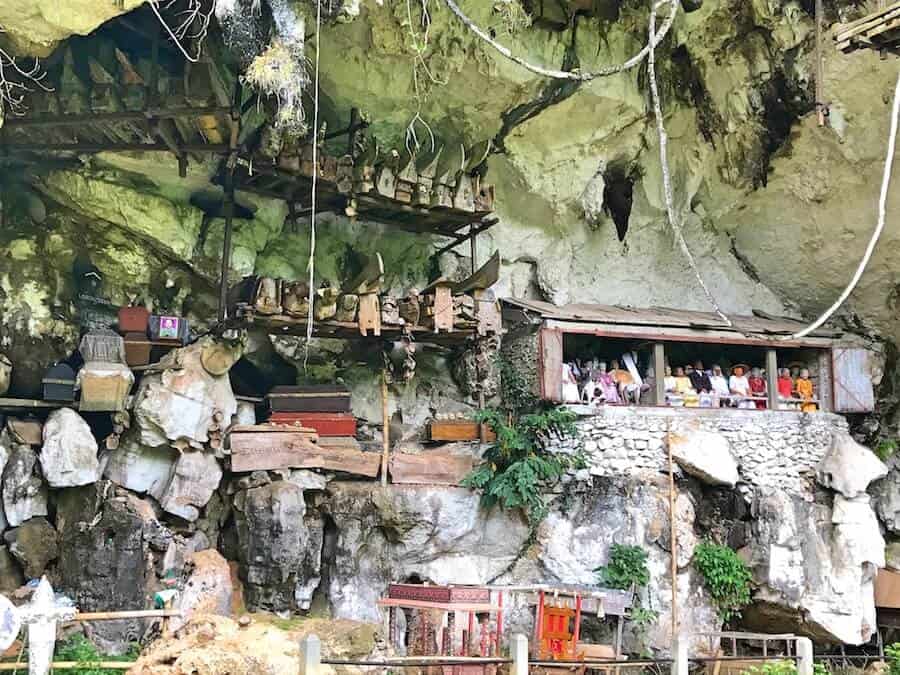 On our visit to Tana Toraja, we visited one of these cave grave sites known as Londa.

It is unique in that is has two burial sites within the one cave, and can be entered by tourists.

Outside the cave entrance you can hire a local guide with a lamp who can take you inside the cave and tell you about the history of the residents. It’s absolutely fascinating; but remember to keep your hands to yourself, as there are coffins, skulls and bones on shelves and ledges throughout. 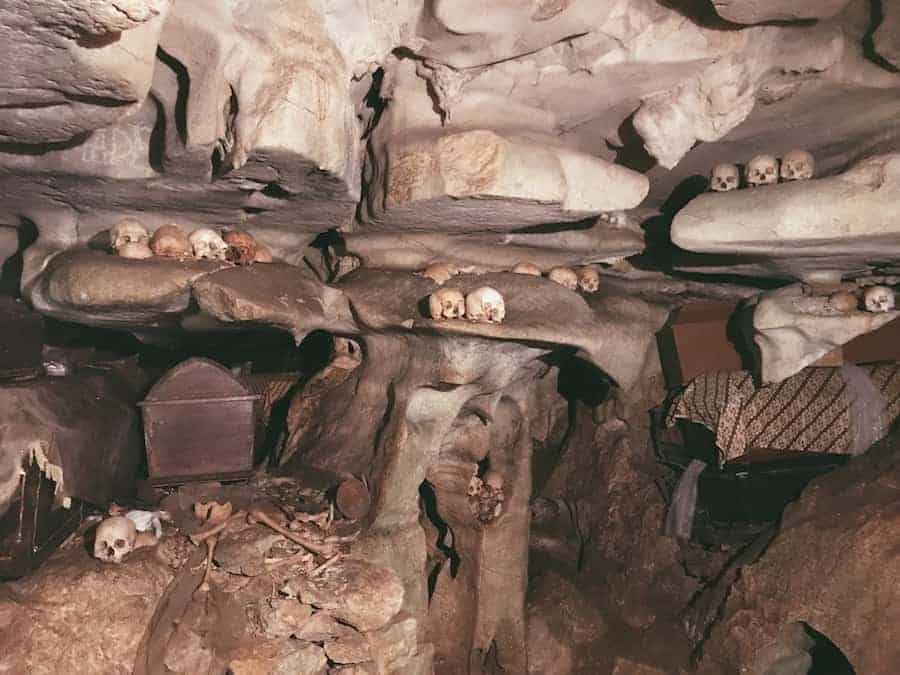 Inside The Cave Grave of Londa

The Death Of Children

Babies and young children, who have not yet grown teeth at the point of their death are not buried in the manner described above. Rather, they’re wrapped in cloth and placed into a hollowed-out tree trunk and then covered with a palm fiber door. The Torajans believe that when the tree begins to heal, the child’s essence will become one with the tree.

Ma’nene: The Ceremonial Cleansing Of Corpses

The Ma’Nene Festival is carried out in August and translated as the “Ceremonial Cleaning of Corpses.” It is often referred to as the “second funeral” and is when relatives of the deceased remove their loved ones from their final resting place to clean the body and dress them in new clothes.

During this ceremony, the corpses are often exhibited in the village and paraded around the streets; hence where the “walking dead” references have come from.

They do this out of great respect for the dead, and often re-inter them with money, cigarettes, clothes and other treasures that they will need in the afterlife.

How To Experience This Cultural Phenomenon For Yourself

While it’s possible to visit Toraja at any time of the year, if you want experience the Torajan death rituals and witness a Rambu Solo or Ma’Nene Celebration, it would be best to time your visit between August and September. The Torajans are happy to welcome visitors to the festivities, as they believe having international visitors in attendance increases their status in society.

Get in touch with the Torajan Tourism Board prior to your visit and they will help point you in the right direction of various celebrations going on in the region.

For an incredible cultural experience, visit Toraja in #Indonesia between August and September to witness the many Torajan death rituals! #culture Click To Tweet

How To Get to Toraja

You will likely arrive in Indonesia at either Bali or Jakarta International airports. From either of these you will be required to take a short domestic flight to Makassar in South Sulawesi, from which you then have two options:

Where To Stay In Toraja 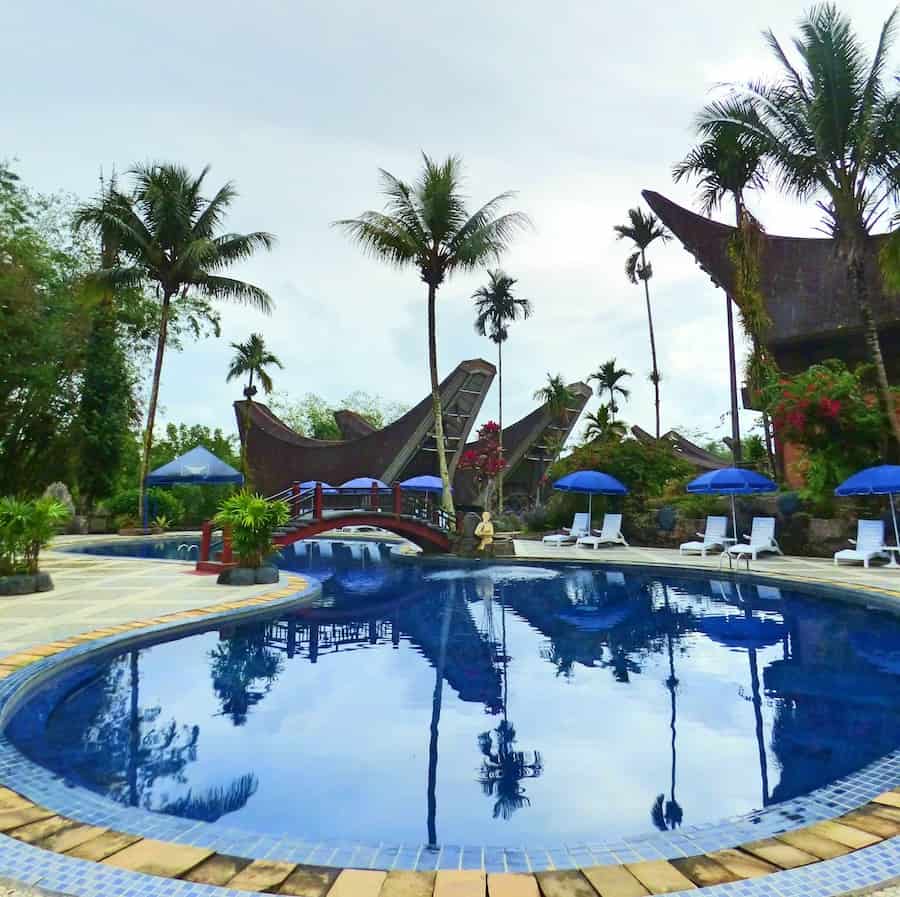 This beautiful hotels sits 700m above sea level with sweeping views of the surrounding hills. The rooms have been built in the style of a traditional Tongkonan and are tastefully decorated inside. The hotel has an outdoor pool, spa, a onsite restaurant & bar and offers free wifi throughout the property.

Or If you have specific accommodation requirements, check out other Hotels in Tana Toraja to narrow down your search.

*This post originally appeared on Make Time To See The World. The trip was hosted by Wonderful Indonesia, though all opinions are the author’s own.

Have you ever experienced the Toraja Death Rituals? Please share your experiences in the comments below!

*Some of the above links may be affiliate links, which means we might earn a small commission on bookings/purchases at no extra cost to you. Your support helps keep Epicure & Culture up and running!