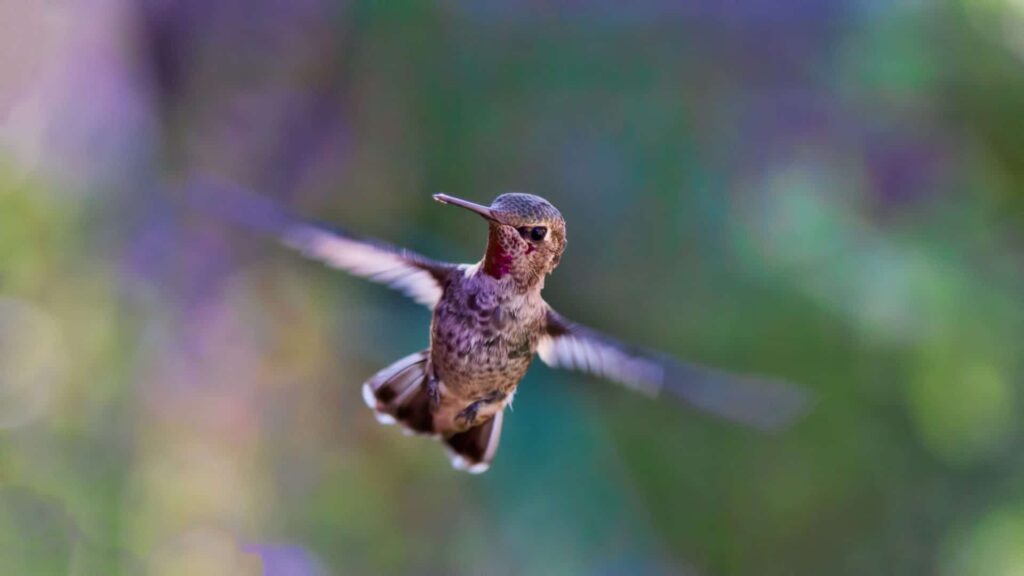 Though Simon Smedberg may have saved 50 dollars by booking flights to Thailand that included three stopovers, he ended up with remorse when realizing the amount of carbon offsets that would be released as a result. So upon returning home to his native Sweden, Smedberg decided to make up for his decision by co-creating a travel search engine providing data on selecting low-carbon emission flights.

Glooby, which launched in 2015, is a green travel search affiliate website designed to give consumers informative purchasing decisions relating to sustainable travel options. While Glooby sorts and assembles a list of flight suggestions from sources such as travel agencies, airlines and booking sites — as other search engines do — this site touts itself as being the first to show suggestions for low-carbon emission flights plus eco-friendly hotels. 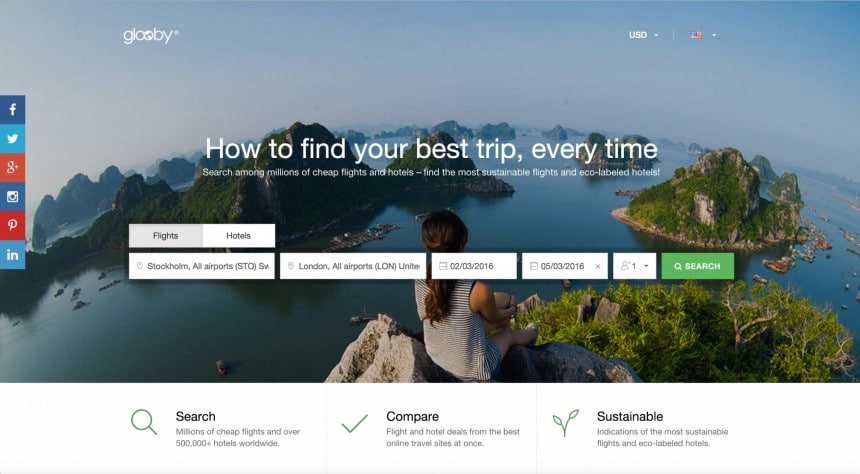 Glooby searches and compares the most fuel-efficient flights and eco-labeled hotels.

Smedberg is noticing travelers are taking more notice about sustainability concerns. Recent studies pack it up too. For example, a 2010 Travelzoo survey found that more than 90% of American travelers would choose to stay at an eco-friendly hotel if price and amenities were comparable to a hotel that was the opposite. An April 2007 Orbitz study listed that for 65% of Americans it would somewhat impact their decision to stay at a hotel if they knew the property was using solar or wind energy to supplement the powering of the building.

“People are trying to make more eco-friendly choices, but at the same time it’s hard to find where these choices are,” Smedberg, who is also Glooby’s CEO, explains. 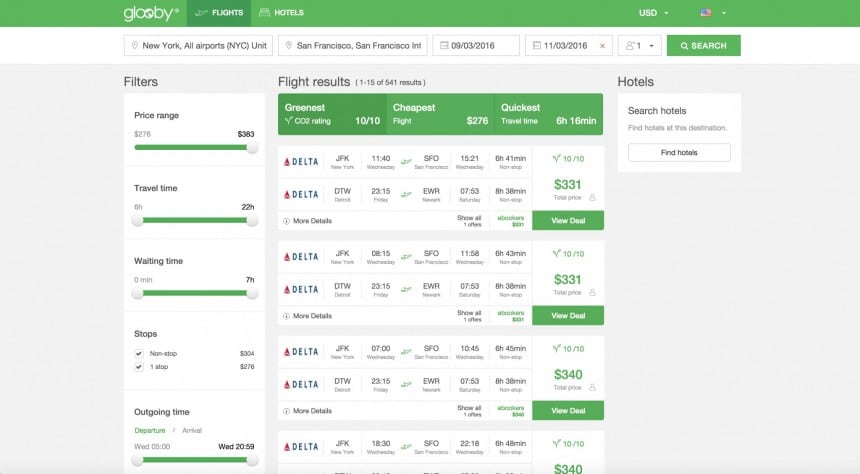 Glooby determines certain factors with flights relating to emission levels such as fuel consumption per aircraft and number of seats.

That is where Glooby steps in. Notes Smedberg, “Our goal is to basically compare every [flight] available – greenest, quickest, cheapest, most popular. I think it’s important [for users] to see as much as information as possible.”

With each flight search, there is a Co2 rating with a 1-10 point scale. Flights ranking higher are graded as the most fuel-efficient, while ones on the lower end are the least. By clicking on this scale, users can do a comparison on how much carbon emissions can be saved.

With its search results, Glooby calculates certain factors relating to emission levels for flights, including fuel consumption per aircraft, number of seats, and cabin class. Explains Smedberg, “We [also] take into account flight distances between two airports.” Note: Glooby has been in contact with, and following the calculations for fuel consumptions, that has been developed by the European Environment Agency.

Yet Smedberg points out that airline companies are making progress in employing new technologies and research developments – such as with Boeing’s 787 Dreamliner – to reduce emissions. Structurally, these steps have involved installing winglets (upward facing wing extensions) on planes to reduce drag and fuel use. Inside the cabin, there are airlines serving locally produced foods and better handling of onboard waste for recycling and combustible disposal. 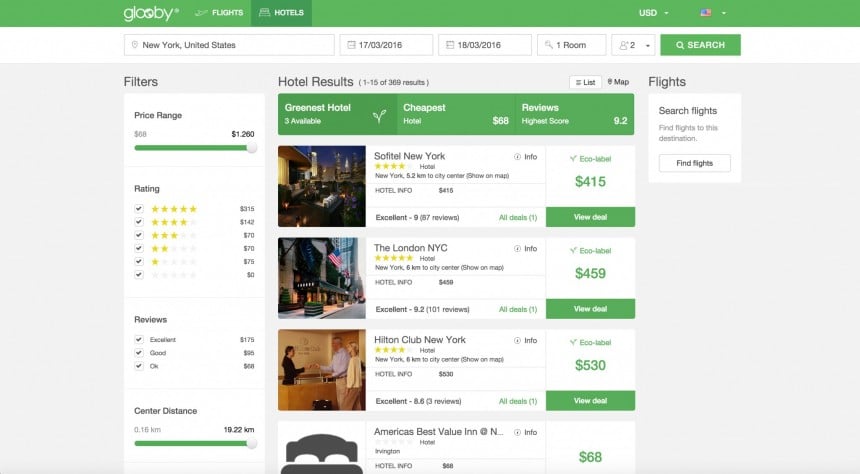 On Glooby, hotels are sorted by standards adopted from the Global Sustainable Tourism Council and in three different formats.

Eco-friendly hotels also have become a focus for Glooby, based on Smedberg’s trip to Thailand. At his hotel, he recalls seeing a tremendous amount of garbage being thrown out, and this excess waste bothered him.

On Glooby, hotels are sorted by standards adopted from the Global Sustainable Tourism Council in three formats: approved in compliance with GSTC standards; recognized as being aligned with certain criteria that meet minimum sustainability requirements; and those that neither fit the previous two categories but are still considered to be genuine in some other standard.

In giving advice to travelers who want be mindful about carbon emissions, Smedberg suggested that they consider choosing to take more direct flights if possible instead of stopovers and do research on airlines that can get to your specific destination faster and quicker.

What tools and tactics do you use to explore with green travel in mind? Please share in the comments below!

How To Have Outstanding Travel Style While Empowering Women [Blog Inspiration]

Vagabonding: An Uncommon Guide to the Art of Long-Term World Travel by Rolf Potts [Great Reads]

Michele Herrmann splits her time between New England and New York City, and has gotten much better at packing light with her back and forth trips. She has jaunted across Europe and up, down and across the United States and even as far as the South Pacific. She's grateful for being able to dispense travel stories and advice through media outlets and companies (as well as putting her BA in English to good use). Her blog She Is Going Places serves as her way to encourage others to get out and exploring!