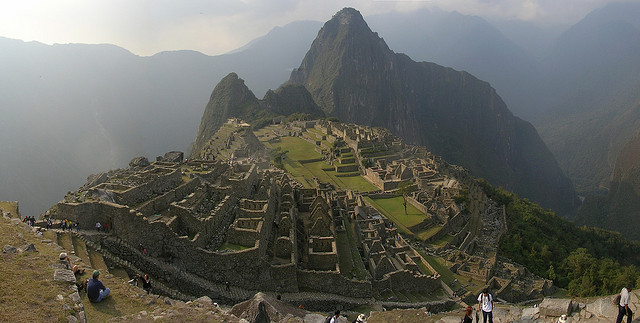 Machu Picchu, the grand finale of the Inca Trail for trekkers (but a long and aurduous journey for porters). Photo courtesy of Oisin Mulvihill.

Twenty-six miles (42 kilometers) of picture-perfect mountains, cloud-forests and jungles make the Inca Trail one of the most famous hikes in the world — and that’s not even mentioning the reward for reaching the final destination of Machu Picchu. The lost city of the Incas was built in the fifteenth century, most likely as an estate for the Incan emperor Pachacuti and a sacred religious site. The Inca Trail was built to allow trade access between Machu Picchu and surrounding Incan towns. It is part of a vast network of long-distance trails, which connected the empire.

Today, both Machu Picchu and the trail itself are two of Peru’s most popular attractions. So much so that as a UNESCO World Heritage Site restrictions have been imposed on both how many people can hike the trail and how many can enter Machu Picchu. This ensures both areas are not damaged by foot traffic.

Currently, the amount of people allowed to begin their hike up the Inca Trail is 500 per day — all of whom must be accompanied by a licensed tour company — with 400 additional visitors allowed entry to Machu Picchu (reaching the site by bus or train). As it was found the hooves of pack animals were particularly damaging to the trail, no horse, mule, llama or alpaca is allowed to help carry trekking supplies along the trail, so the responsibility befalls fully on human porters.

A typical trek up the Inca Trail takes four days; however, several additional routes exist that allow for longer or shorter hikes. Regardless of the route, it means plenty of supplies are needed to reach Machu Picchu. This includes everything from personal tents, clothing and sleeping bags, to extra dining and kitchen tents, food, water, tables, chairs and a gas bottle stove. All of these items are then carried and set up by porters.

The weight of everything a porter needs to bring along the grueling hike is quite significant. Even still, to save costs for tourists hiking the trail, many trekking companies attempt to limit the amount of porters they send with each group in order to cut labor costs. Generally, the ratio of trekker to porter is 3:2. 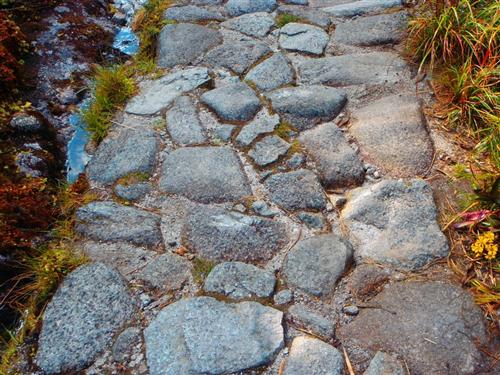 Climbing The Inca Trail As A Porter

A day for a porter on the Inca Trail begins bright and early, with them preparing all the tents and equipment to be bundled into a large backpack — which often rivals the porters themselves in size — that they’ll carry along the trail. As groups have a separate guide who is not a porter themselves, the porters are expected to hike ahead of the group so they can unpack dining and kitchen equipment. This way, meals are ready for the trekkers when they reach their rest stop.

Once the group has eaten — if there is any food leftover — it gets divided between the porters. They must then hurry to eat and pack up the kitchen and dining tents yet again while the group continues their hike. In order to get the next pit stop ready for their arrival the porters must pass the group that left before them while carrying much heavier loads.

In stops where the group will spend the night, porters must also prepare the sleeping tents for the trekkers. After the group finishes their dinners, the porters can help themselves again to leftovers. It is then not only until all of the trekkers have left the dining tent that the porters can sleep. They generally sleep together in the dining tent area, so they don’t need to carry the weight of a personal sleeping tent for themselves. While communal sleeping areas provide additional warmth, dining tents don’t usually include a floor covering, so porters often face wet sleeping conditions on rainy nights.

Porters then wake before the group, in order to begin packing up the campsite before beginning the same routine for the following day.

Since work as a porter is physically exhausting, the Peruvian government saw fit to enact Porters’ Law in 2003. Under this law, it is required that each porter receives payment of 43 Peruvian Soles (about 15USD) per day. This equates to slightly more than Peruvian minimum wage. Additionally, the law states that porters can only carry a maximum of 44 pounds (20 kilograms), with at least 11 pounds (5 kilograms) being reserved for personal items for the porter themselves.

In order to ensure this requirement is followed, each porter is weighed at the beginning of the trail and again at Wayllabamba at the end of the second day. If a porter is found to be carrying more than the maximum weight, their company will be fined, with multiple fines resulting in a loss of the company’s trekking license.

Despite the conditions of the law, many companies have gained notorious reputations for finding ways around them.

As many porters are native Quechua farmers looking to earn additional income during the off-season for farming, they are willing to accept a lower wage. If questioned about their payment, they are often told to lie about their wage. And if company administration finds out their porters have been telling trekkers they are not receiving a legal wage, they are likely to find themselves out of a job.

In terms of weight limits, companies have been known to put further restrictions on the amount of personal items a porter can bring. If a porter is found to be carrying more than the allowed amount, the cost of the fine will be taken from their pay. This means that porters are often unable to bring warm clothes and blankets with them, for fear of it resulting in them paying a fine. Alternatively, other companies get porters to ask cooks, guides and even trekkers to carry an extra load when crossing through checkpoints, so it appears as though the porters are carrying a lighter load than they really are. 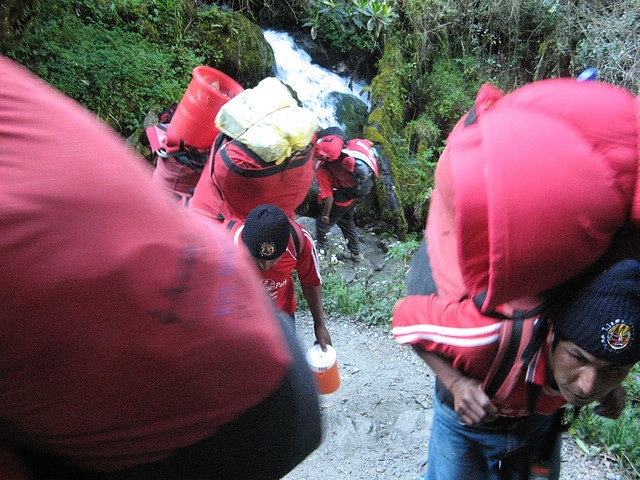 If you think the Inca Trail is tough for you, these guys have it much worse. Photo courtesy of brianholsclaw.

Despite the difficult conditions porters face, many are seasonally out-of-work farmers who need to find an extra source of income during the off-season to finance their farming operations. As a result, they would rather face poor working conditions and low wages than be out of work and unable to support their families. Many of these porters are from the native Quechua groups and leave their homes during the trekking season from May through September), completing weekly hikes.

Not all tour operators along the Inca Trail treat their porters poorly, and choosing a responsible company can ensure the your memorable experience does not come at a cost to anyone else. Booking a trek needs to be done several months in advance, as entry restrictions mean there is quite a waiting list for entry. Before making a selection, there are a few key things to look for in a company that are clues towards their responsible treatment of trail porters:

Once you’ve finally begun the trek, there are several more things you can do for your porters (that won’t break your back):

1) Leaving a tip can make a big difference for the overall wage a porter receives during the trek. As a group, you should tip about the following amount for each worker:

2) Simply talking with your porters can be an easy way to engage them and make their trip more enjoyable. Many are proud about their native culture and will be more than happy to share their local knowledge with you.

Do you have information or a tip to add? Please share in the comments below.

Judi Zienchuk has lived everywhere from Southeast Asia to Northwestern Canada. When she's not galavanting the globe, you can usually either find her on a bike or consuming large amounts of caffeine (maybe even both at the same time). To get more personal, check out her blog, Travvel Sized.