Time for a geography lesson:

The capital of the United States?

The capital of Switzerland?

The Christmas Capital of Europe?

The famed Strasbourg Christmas Market plays a big part in this.

Locals exhibit a fierce and cheerful pride for their city’s centuries-old winter tradition, despite Strasbourg in December being extra crowded with tourists celebrating the holidays in France.

These visitors hope to learn firsthand what Strasbourg food, drink and sights make the city the epicenter of Europe’s holiday season.

Psst! Don’t forget to pin this post for later:

The Strasbourg Christmas Market is known in French as the Marchés de Noël.

Other times, it’s known as the Christkindelsmärik in Alsatian — a dialect of German spoken in the eastern region of France known as Alsace.

In Alsace, historical ties to both France and Germany present a unique hybrid of cuisine and culture that can’t be found anywhere else.

The Strasbourg Christmas Market dates back to 1570 — meaning it’s the oldest Christmas market in France, and among the oldest in Europe.

Over the course of more than 400 years, Strasbourg’s market has expanded.

What was once only one singular market in front of the legendary Cathédrale de Notre Dame de Strasbourg now consists of stalls spread to almost every corner of the city.

For 2018, the Strasbourg Christmas Market dates run from November 23 through Christmas, with some of the 300 stalls open until December 30.

This fact makes being in Strasbourg on Christmas even that much more magical. 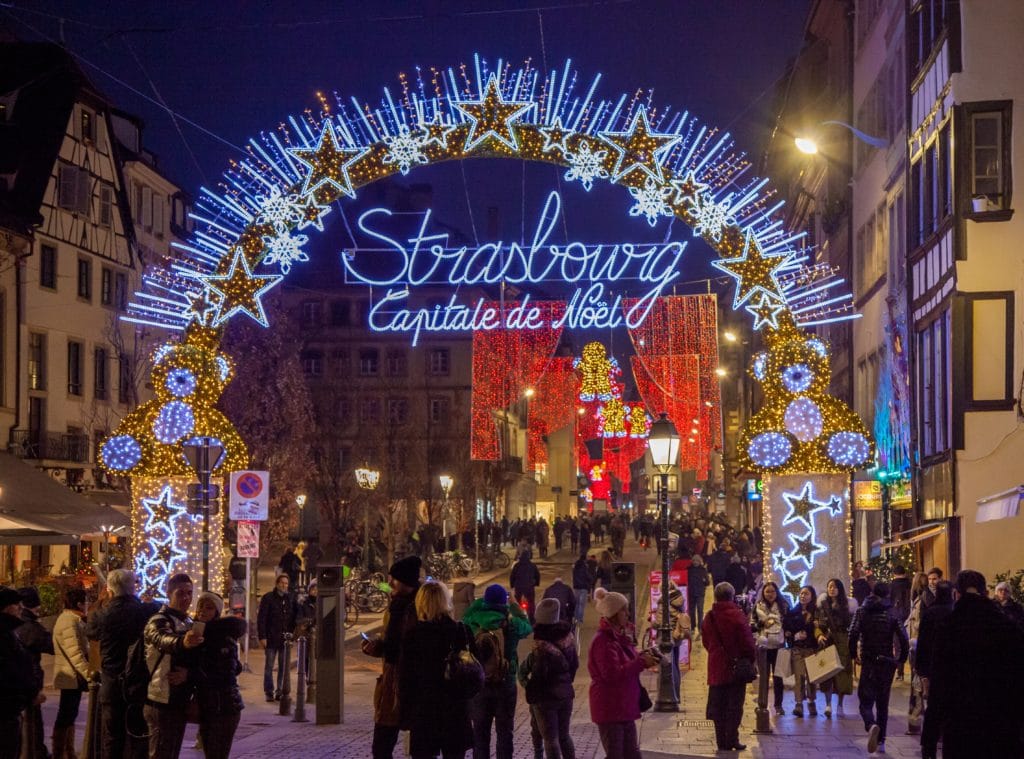 For locals — many of whom have been dodging tourists and skirting through crowds for as long as they can remember — this means a complete upheaval of daily life.

Quite literally, the entire city bows to the whims of those seeking their annual dose of Christmas Spirit.

Yet, despite their protests, it’s clear to me — as an outsider — that this tradition is something of which les Strasbourgeois are immensely proud.

And for good reason.

It’s my first year in the city during the holiday season.

And since I am, indeed, neither tourist nor local, I decide it’s worthwhile to experience the Christmas markets in Strasbourg like any other tourist would:

By eating my way slowly but surely through cobblestone streets and bustling markets. 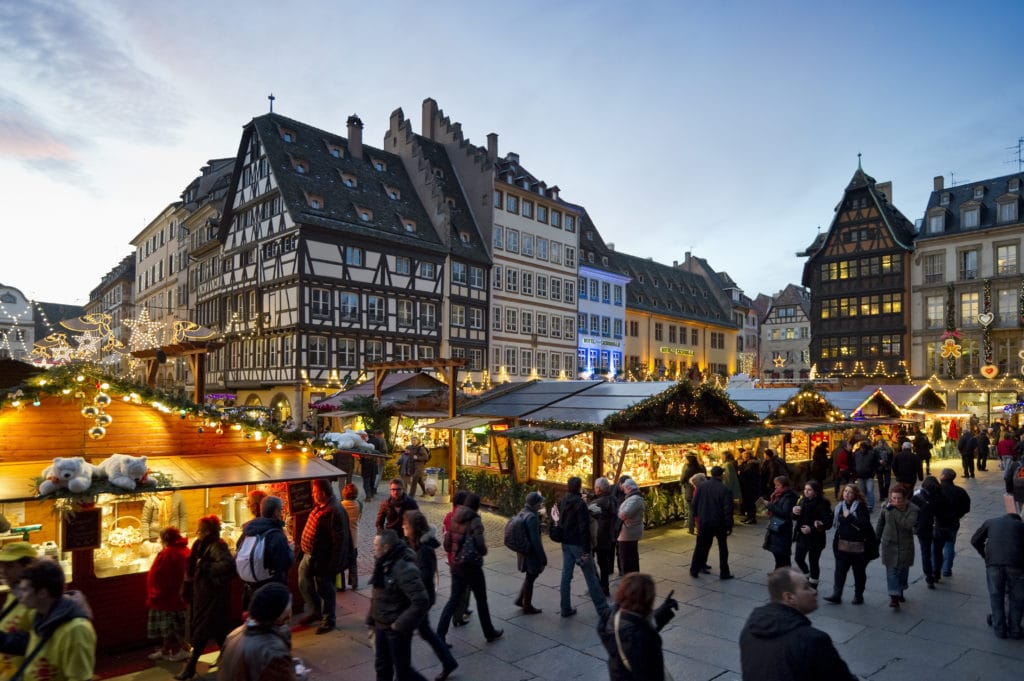 So, on the first Saturday of December, I let the scent of mulled wine be my guide.

Honestly, the enticing aroma is so strong it reaches my top floor apartment.

Then, out I go, diving stomach-first into the crowds to see what I can find.

This area — a popular place for Strasbourg tourism — boasts around 30 stands.

These are filled with snacks, decorations, and hand-crafted goods, all of which rest in the shadow of the towering and unbelievably beautiful Cathédrale Notre-Dame de Strasbourg.

In an attempt to ease my body into the food-filled stupor I will undoubtedly face later, I start off small.

My “warm-up” is a food so essential to modern Alsatian culture it’s even used as a regional logo: 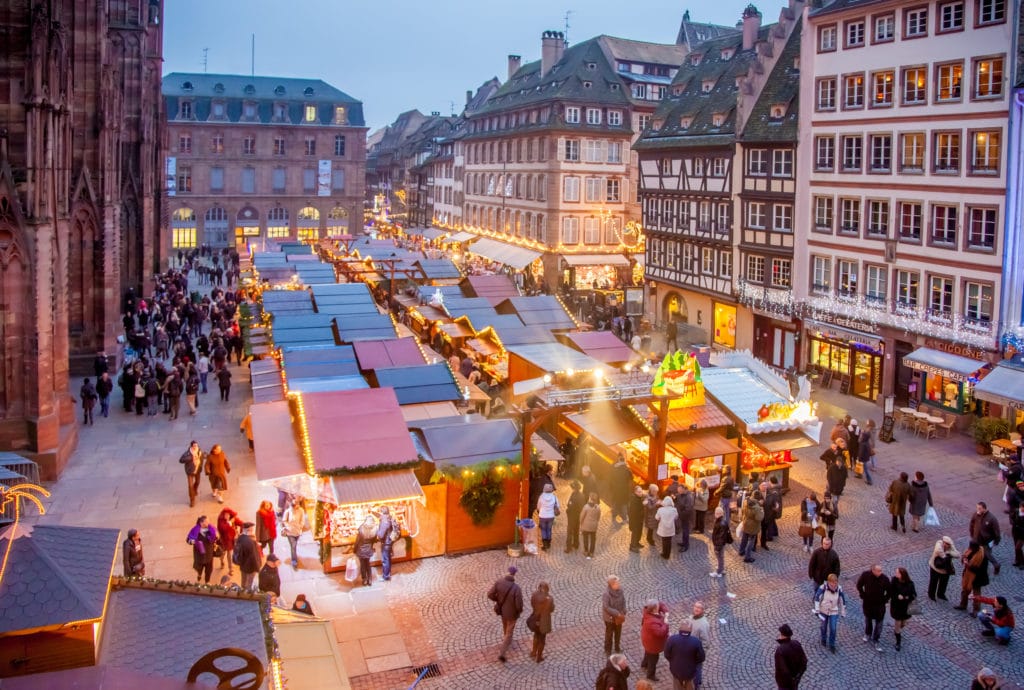 “Margaret, what’s all the fuss about? Isn’t this just a soft pretzel with one misplaced letter?”

To which I will reply that I too was once so naïve as to think this buttery and salty treat is just a soft pretzel hiding in cheesy lederhosen. 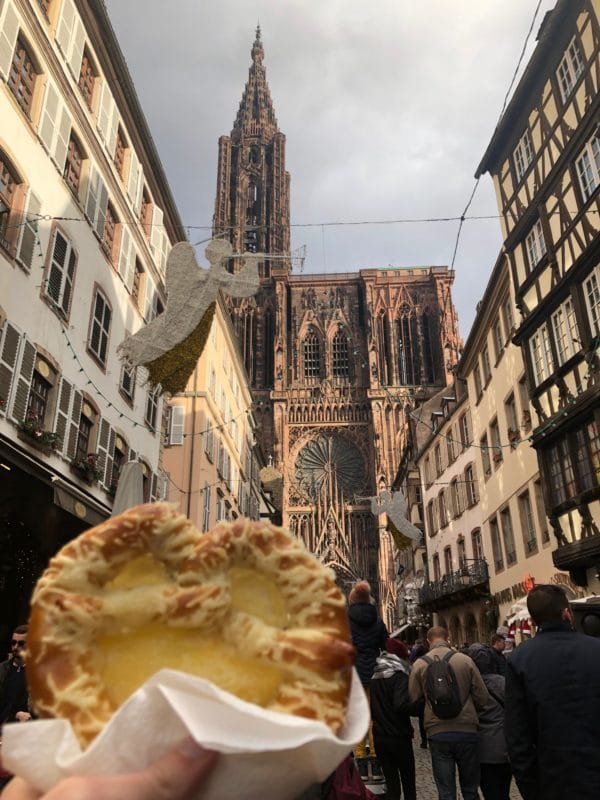 It is true that the term bretzel comes from the German word, Brezeln or Brezen.

And the similarities between this Alsatian snack food and the American ballpark staple do lead me to consider the Bretzel a tasty cousin of the American soft pretzel.

Yet, the toppings on this baby take bretzels to a whole new level.

You have your choice of plain, or topped with emmental cheese and lardons — tiny strips of pork used frequently in Alsatian and French cuisine.

Since I’m vegetarian, I opt for the version with emmental, sans lardons.

It’s satisfying and delicious —but not overly indulgent, making it the perfect snack for munching.

Which I happily do as I make my way away from the Cathédral and towards Place Broglie, a large square in the German quarter sometimes known as Neustadt. This was the city’s center between 1871 and 1918, when Alsace was part of Germany.

In Place Broglie tidy rows of wooden huts — each decorated according to the contents inside — are filled with innumerable salty and sugary snacks.

There are stands showcase traditional goodies like those you’d find in a typical French cafe around lunch time.

These include sandwiches filled with various combinations of butter, cheese, meats, and toppings, as well as crèpes, which can be filled with either savory or sweet fillings.

However, unlike other French markets, this area also boasts pommes de terre (potatoes), choucroute (saurkraut), spaetzle (based on the German noodle dish spätzle), and portable versions of a dish known as tarte flambée or flammkuche. 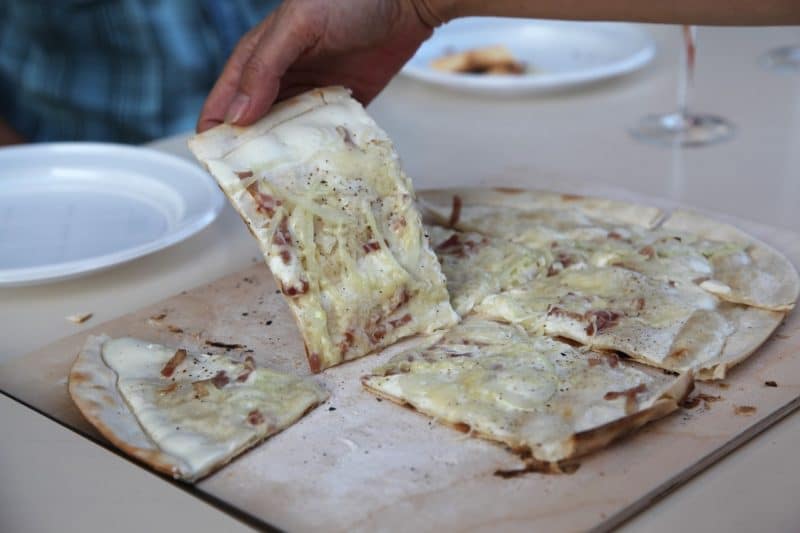 I feel obligated, at this point, to include an aside on the Alsatian phenomenon known as the tarte flambée.

Tarte flambée is essential to Alsatian culture and is so sacred to my friends here that I wouldn’t hesitate to consider it of equal importance to such other French staples as baguette, wine, cheese, and my favorite, butter.

If you visit Strasbourg, you cannot leave before you try one of these mouth-watering tartes.

They make the perfect food for sharing with friends in between drinks, too — although I guarantee that once you take your first bite you’ll want to order a second tarte flambée all for yourself.

On this Saturday, however, I skip the tarte flambée and head to a stand offering golden roasted potatoes and spaetzle with lardons, cheese, and crème fraîche as potential toppings.

I choose the spaetzle, because I’ve only ever tasted the dish in Germany, and I imagine this experience will be quite different.

Silently cursing myself for being a vegetarian in a region that cooks such unbelievable meat dishes, I place an order for noodles with all cheese and no meat, but am not disappointed. 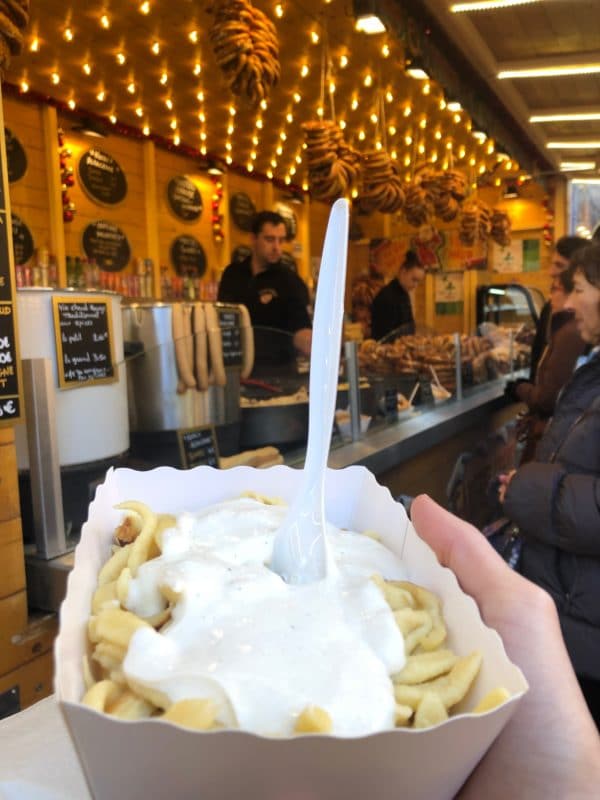 To be clear – this is not diet food.

As he hands me my spaetzle — already perfectly browned and steaming hot — the server kindly douses my noodles with not one, but two heaping spoonfuls of crème.

I can only compare the resulting combination to macaroni salad because I can think of no other equivalents in American cuisine.

Basically, imagine the most indulgent, rich, creamy, comforting macaroni salad you could ever get your hands on.

I could have split the dish with several friends and still have been full, but I keep eating until almost every little noodle is gone.

Because spaetzle is just that good.

I can only imagine how this dish tastes with lardons on top too, and recommend any visitors to Strasbourg with different morals – or perhaps, more common sense – opt in on the lardons.

Moving On To Mulled White Wine

Once finished, I give my stomach a rest and elect to taste some mulled wine.

The markets in Strasbourg are unique for wine, too, as they boast both mulled red and white wine from their many stands.

I’ve had mulled red wine before. It’s like a boozy version of mulled cider, with hints of orange, cinnamon, nutmeg, and other spices.

If I know anything about wine consumption, however, it’s that reds are typically served at room temperature.

Thus, they make an ideal beverage for heating with spices, while white wine ought to be served nice and chilly.

I’m curious, therefore, to see how my favorite refreshingly cool summer beverage tastes when the weather is cold but the drink is not.

So, I try my luck at one of the many stands serving hot beverages in Place Broglie.

Once again, I am not disappointed.

Mulled white wine reminds me even more of hot cider since all the spices are so similar.

Yet, like mulled red wine, it is rich and full-bodied, which makes this drink something of a perfect love-child between red wine and cider.

For those of you who happen to have the chance to visit Strasbourg during the holiday season, you can take my word for it:

The red wine is good but the white wine is better.

Honestly, this experience alone has convinced me this is among the best Christmas markets in France.

The Best Of Alsatian & French Desserts

As I drift into the kind of sleepy trance that only comes from being filled with good food and wine, I take a second lap of the markets preparing to make my hardest decision of the day:

What to eat for dessert? 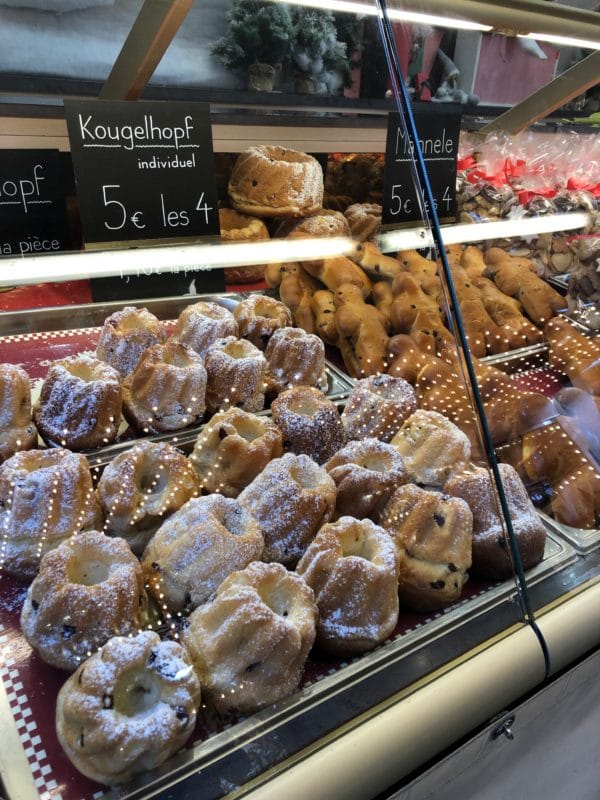 I wander through each row of chalets and take in the piles of:

Finally, I decide on a mini kügelhopf — a bundt shaped pastry filled with raisins and dusted with powdered sugar.

As I munch on my tiny cake — which reminds me of a mix between a brioche and a croissant, slightly sweetened by the raisins — I reflect on my day.

Still, as I turn towards home with my legs sore from walking and belly full, I feel lucky to live in the epicenter of Europe’s holiday season, where I can keep seeing, hearing, and tasting Alsatian Christmas all month long.

Strasbourg Christmas Tree: Along with the delicious food and drink is the famed Christmas tree, standing beautiful and proud at 30 meters (~100 feet) tall. Don’t miss it!

Hotels In Strasbourg France Near The Christmas Market: There are a number of accommodations nearby to choose from, including:

Have you visited the Strasbourg Christmas Market? Please share your experience in the comments below!