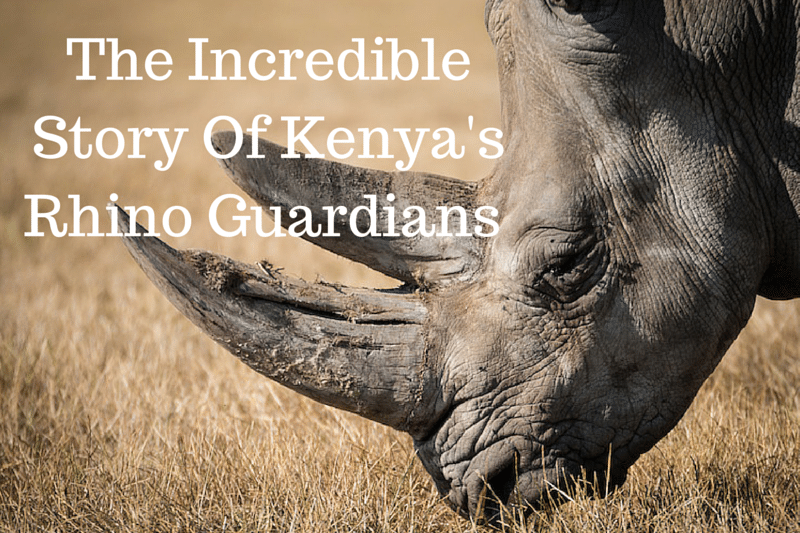 Species extinction is happening at an unprecedented rate, and we are in the midst of the largest loss of biodiversity on the planet since the extinction of the dinosaurs.

Animals, birds, sea life and insects that we’ve never heard of, let alone studied, are being eliminated every day. Even those we know and cherish are facing changing environmental conditions, habitat loss and general threats by humans — including poaching.

While these issues play a critical role in the rapid decline of many species, simple human greed is threatening numerous types of iconic megafauna, including the elephant and the rhinoceros. One glaring casualty of that greed is the northern white rhino, hunted to the point of extinction for its horn. Once ranging throughout several countries in central Africa, there are now no known wild northern whites remaining. There are three northern whites living out their days in a conservancy in Kenya, as efforts to breed and reintroduce them have failed.

Species extinction is happening at an alarming rate. Here's what being done to help. #travelgood Click To Tweet 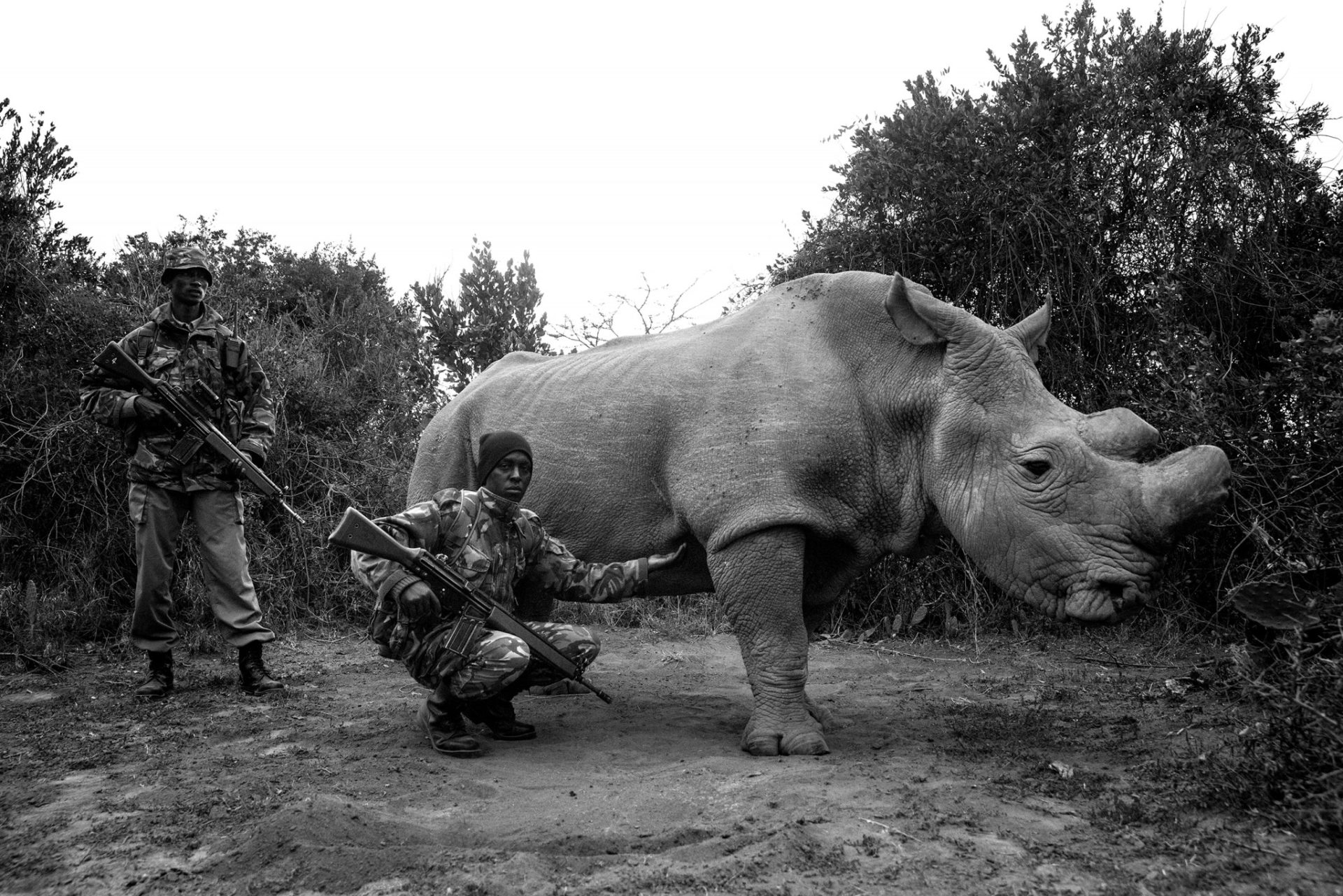 While the northern white rhino species is effectively extinct, in an inspiring counter to the greed of poachers a dedicated group of men protect those three remaining rhinos with their lives. Day in and day out, the rangers guard these remnants of another era, whose horns are medicinally useless but trade at a per ounce rate exceeding that of gold.

For her “Watchmen 20” series photographer Tierney Farrell spent time with the rangers, getting to know them and telling their stories through photos. She captures their love of the rhinos, their pride in their jobs and the pain of watching the species slowly slipping away. Tierney explains how she is able to capture portraits of people that reveal something of their essence, how to be respectful when photographing people while traveling, how the ubiquity of cameras has changed photography and also shares her top tips for aspiring photographers. 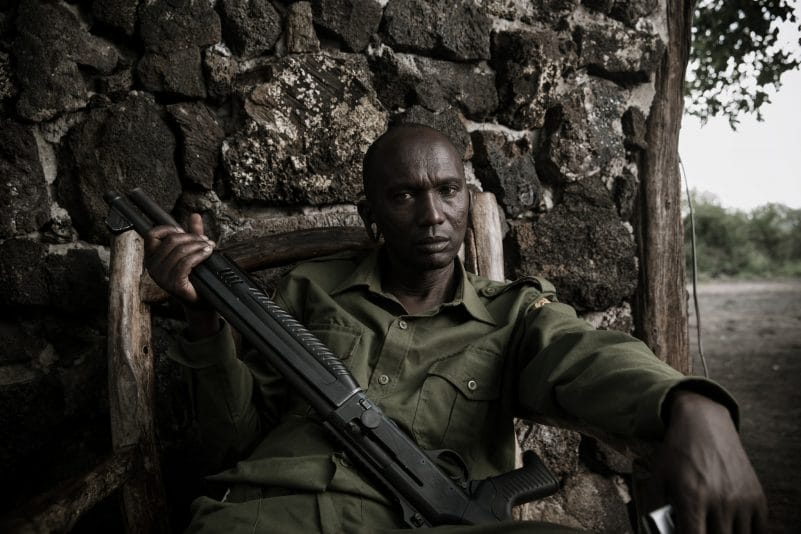 1. You captured some incredible, intimate photos of the rangers charged with protecting the remaining handful of northern white rhinos in Kenya. In the photos I see both their tough resolve, but also some of their vulnerability. Can you talk about how you were able to get these men to open up to you and allow you to capture these images?

Relationships and interactions are everything; you really need to build some kind of base before you start photographing in this type of setting. Time is always a challenge, so I did the most with the time that I had.

When in a foreign environment, it’s essential to be culturally sensitive and respectful. I genuinely care about what’s going on here – the people, the animals and the overall crisis. I think that caring made creating friendships with the men easier, and friendships were the foundation for the photos. Smiling, a light heart, open body language, good eye contact, asking questions and helping hands go a long way. If we all ever had down time, we would hang out, talk, play sports, or take photos with a little Polaroid camera I brought.

With all that said, I believe it was disarming and a certain level of trust and mutual respect was established, which created a non-threatening environment for photos. I noticed that they felt comfortable to be themselves, and even empowered by having their photo taken. They were also just a great crowd, so I was lucky.

2. Many people feel either shy or voyeuristic capturing images of people in foreign cultures (or their own!). Can you provide some advice to photographers that want to be respectful of individuals but also come home with visual memories?

Feeling shy isn’t necessarily a bad thing; it means that you respect the space of the people you want to photograph. Street photography can be especially challenging because it’s so candid and moments come and go so fast.

I have some experience with this in India, Kenya and Peru and have learned a lot. If someone is looking at you, I would suggest to respectfully imply with your camera that you want to photograph them. Sometimes they will turn away or say no, so you should move on and not photograph them. Sometimes they seem ok with it, so go for it. I always nod to say thanks, and if they seem intrigued I’ll even show them the photo.

Everyone is different, so I would get their reaction before taking a photo if they are looking at you. I’ve found that it’s best to keep a healthy distance from your subject as well. Take your time and don’t be in a rush.

The type of photography for the Watchmen 20 series was clearly more planned, so it was different. I still would always ask if someone wanted their photo taken, and involve them more since it was a more intimate setting. Either way, it’s always best to make respecting people and their space a priority, and not be too obsessed with what you’re going to come away with. It’s never worth making someone angry or uncomfortable just to get a photo. Lasting impressions are more important.

3. What do you think the ubiquity of cameras (in phones, etc) has done to photography? Has it made your human subjects less receptive to having their photo taken?

I think this can go a lot of ways depending on factors like location, the type of camera, how touristy it is, and of course the individual.

Overall, people are definitely more used to seeing cameras around than ever. It has become not so surprising or unique. Locals are used to people passing by and snapping photos without much thought, particularly in touristy areas. I imagine the repetition to be draining and numbing, and that each photo becomes less special and more invasive. I’ve seen people block their face if I’ve walked by with a camera, even if I had no plan to take a photo of them. Other people seem unfazed, and others want their photo taken as a way to ask for money. It’s a bit of a wild card.

People’s reactions may also depend on the type of camera someone has. If someone has a huge camera with a big lens, the photographer will stand out more and draw more attention. Big cameras suggest that it’s for something professional or worth a lot of money, and therefore people tend to react more strongly. I hear of a lot of travel street photographers preferring to take smaller, more compact cameras so it’s not as intimidating and draws less attention. Phones are probably the most common way to take a photo nowadays, so I assume phone photos probably seem like less of a big deal since they are so discrete. 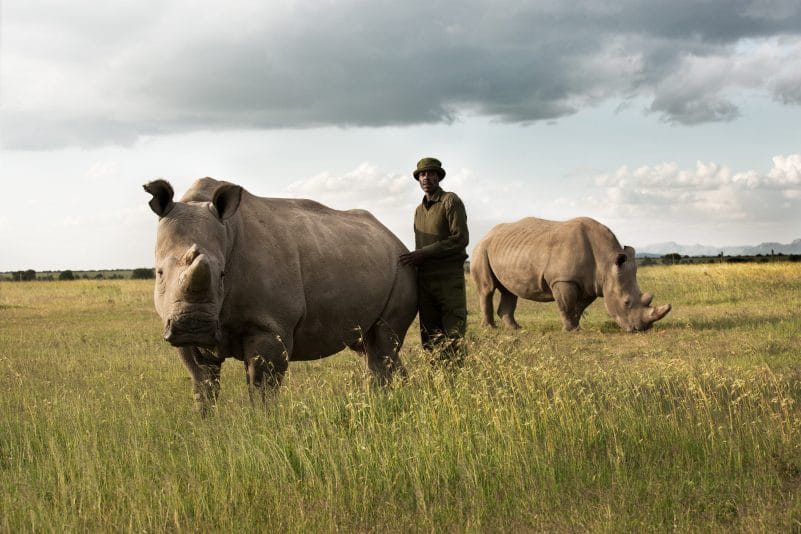 4. How does your work impact you and shape your future? How did the Watchmen 20 change you?

I’m most fulfilled by work that means something to me and can give people a voice, and in this case animals as well. I enjoy work that empowers people and represents their natural beauty, strength and dignity. When I’m able to do projects like that, I feel energized and really satisfied about being a part of something that I think is important. It motivates me to want to do more of that type of work in the future, and highlight other world issues through similar series.

When I was starting out, I was fortunate to have some opportunities to take photos around the world, which affirmed my special interest in it. Watchmen 20 was the first complete series that I’ve done, so I’d like to structure future work in a similar way, so that it’s more of a story.

5. Many people aren’t aware of the scale of the poaching crisis in Africa. Do you see your work changing that?

I certainly hope so, even if on a small scale. I approached this project as a fine portraiture series, which I haven’t seen done for this particular subject, so I think it has the potential to stand out and hopefully reach a lot of people because of the unique presentation. Not a lot of people have the opportunity to photograph so up close and personal with these men, and I’m incredibly grateful for that and want to do all I can to give this issue a voice.

6. What are your top three tips for aspiring photographers?

1. Don’t compare yourself to what others are doing or how successful they seem. If anything, let it be an inspiration, but don’t let it get you down. Nobody became world-class overnight. Sure, there’s natural talent, but it doesn’t get anywhere without sacrifice, hard work, rejection, disappointment, and even loneliness. You never know anyone’s story without asking, so don’t assume it’s been easy or fast for them.

2. Be very open to investing in personal work, whether it’s time or money. Personal work will help you discover what you’re passionate about and what you want to focus building your portfolio on. Personal projects aren’t confined to anyone’s vision but yours, and you are free to try things, which ultimately shapes you as an artist and shows what you’re really capable of. We all want (and need) to be paid, but my personal work has gotten me a lot of my paid work.

3. Stick with it. It takes a long time to build a portfolio that you’re happy with. It’s a lot of work keeping your portfolio reflective of your current skill level, especially in the first few years since you learn so much. It’s a more competitive world than ever, so it’s easy to feel discouraged, but don’t give up if it’s something you love.

Tierney Farrell is a photographer and fine artist based in New York whose work has been recognized by National Geographic editors and photographers. Tierney uses a warm approach in her photography to break barriers and seek a raw honesty within her subjects. She places high value on relationships and takes genuine interest and care in people, which creates the foundation for her work. Her project in Kenya, Watchmen 20, was shot during the first phase of production of a feature-length documentary, When Lambs Become Lions. The film follows men on both sides of the poaching crisis in Africa.

“A huge thank you to Ragtag Tribe films for opening the door to this incredible opportunity and making this project possible.” — Tierney

Thoughts on rhino poaching and measures to curb it? Reactions to the Watchmen 20 series? Please share in the comments below!

Can Zoos Be Ethical? Answers For The Responsible Traveler [Blog Inspiration]

The Last Rhinos: My Battle to Save One of the World’s Greatest Creatures by Lawrence Anthony [Great Reads]

Gretchen Healey gave up a window office in the IT industry to embrace travel as a profession. When not traveling, she runs Pangolin Media, a full service copy writing development and online strategy consulting company focused on the travel industry and wildlife conservation. She has visited more than 30 countries, and each travel experience has enriched her life immeasurably. When she is home, she can be found hiking with her husband and dog, cooking, gardening or skiing.