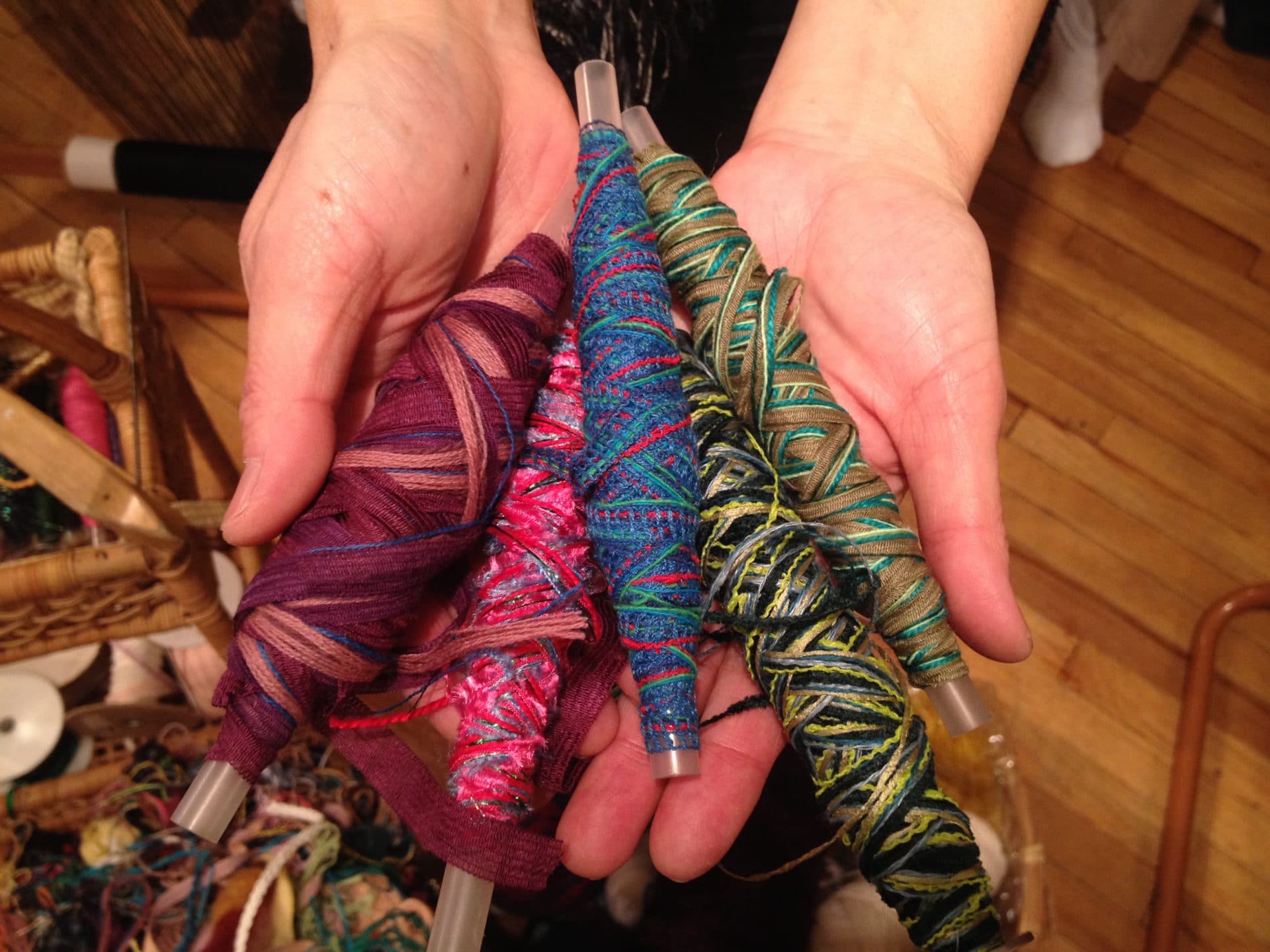 Loop of the Loom spools. Photo care of Yukako Satone.

Yukako Satone first knew that her life was going to change in 2001. She just had no idea how much.

Yukako was a new mother, a graphic designer with 15 years of experience working in both New York and Japan. She knew that she was looking for a new activity to pursue, but she didn’t know quite what, until she discovered SAORI thanks to a friend, who had signed her up for an intensive class.

While Yukako admits that she had never been the crafty type, from the moment she discovered SAORI, a form of Japanese weaving, she knew that this wasn’t something unique.

As she took her seat in the intensive class, she first came face-to-face with the 88-year-old speaker and instructor, Misao Jo, the SAORI founder. “I need one thousand of Misao Jo,” Yukako remembers her saying. She took the message to heart and brought a SAORI loom back with her to New York. SAORI has been with her ever since — and now she wants to share it with the world. 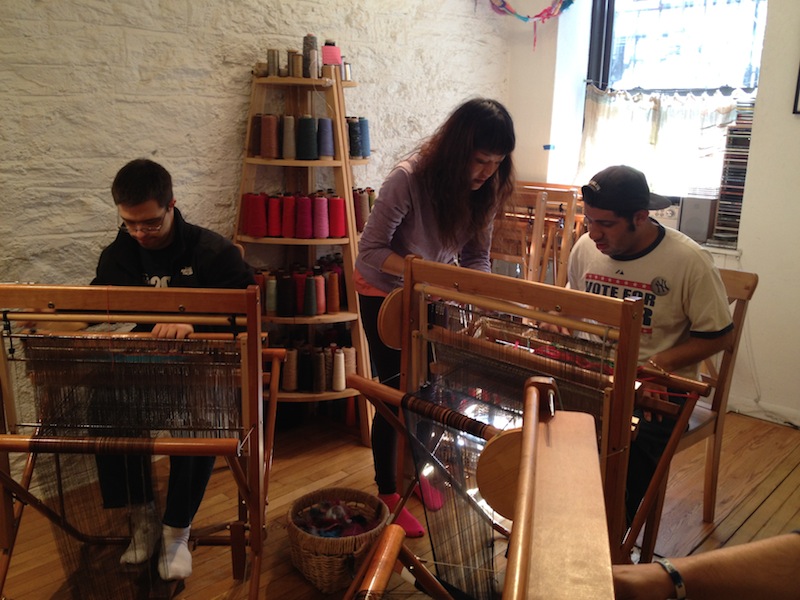 SAORI is a unique form of Japanese weaving started by Misao Jo. The concept of SAORI is to refuse the idea of mistakes. Each movement, each thread used is integral to the whole piece. The free-style weaving form’s name comes from the word “sa,” which is used in zen vocabulary to mean that everything has its own dignity — and that’s exactly how Yukako interpreted it.

“There is no perfect straight line existing in the natural world,” Yukako explains of this philosophy. “We are all different. We should not become like machines.”

As a result, every weaving project made with a SAORI loom is completely unique, and the product is only half of the goal. The weaving process brings weavers closer to a zen state of mind, making it an ideal activity to take on at any point in one’s life.

Starting Loop Of The Loom

Yukako understood very early in her relationship with SAORI that this was something she would share. After hosting her first SAORI workshop for friends in New York not long after 9/11, Yukako realized that sharing SAORI was perhaps even more fulfilling than practicing it. For ten years, she traveled with a portable loom, teaching SAORI weaving to different people, just for the pleasure of doing so.

Yukako didn’t begin to capitalize on her love of SAORI until she started Loop of the Loom in 2005. Four years after sharing it with her friends in grief post 9/11, Yukako had realized that SAORI was something that could be shared in joy as well.

How SAORI Can Help 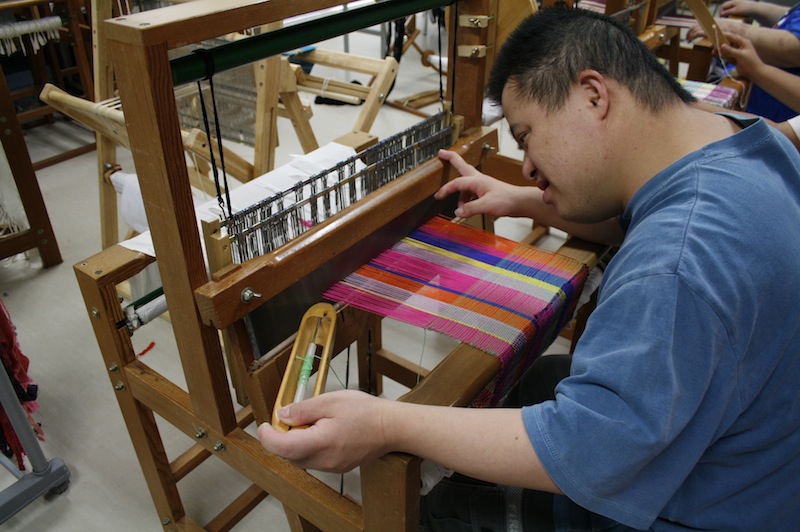 Loop of the Loom brings in clients from all walks of life — children, parents, business people, the elderly — but SAORI has been shown throughout the world to be particularly helpful when used as a form of art therapy for the mentally and physically handicapped, something that Yukako wanted to focus even more on within Loop of the Loom.

“Other art forms required time limits (i.e pottery) Or finished quality (i.e. painting),” she explains. “But weaving is a continuous process in where the beginning and following stages are always readily visible. (…) There are no mistakes and no sample work.”

SAORI as art therapy has been done in Japan in shelters and hospitals for nearly 40 years; it’s no surprise that Yukako wanted to bring this element of the art form that has so changed her life to her own New York studio.

While Loop of the Loom has completed many different projects with handicapped groups, this year, the team has decided to take on an even bigger initiative: uniting New York fashion designers — including students from FIT and Parsons and alumni from the Maryland Institute College of Art — and autistic weavers from Japan.

“This collaboration event is a great opportunity to reach different people whom have never related with disabilities, who never work with fashion field, art, welfare, etc,” Yukako says.

And yet, Yukako still attributes at least some of the credit for the idea to Misao Jo. 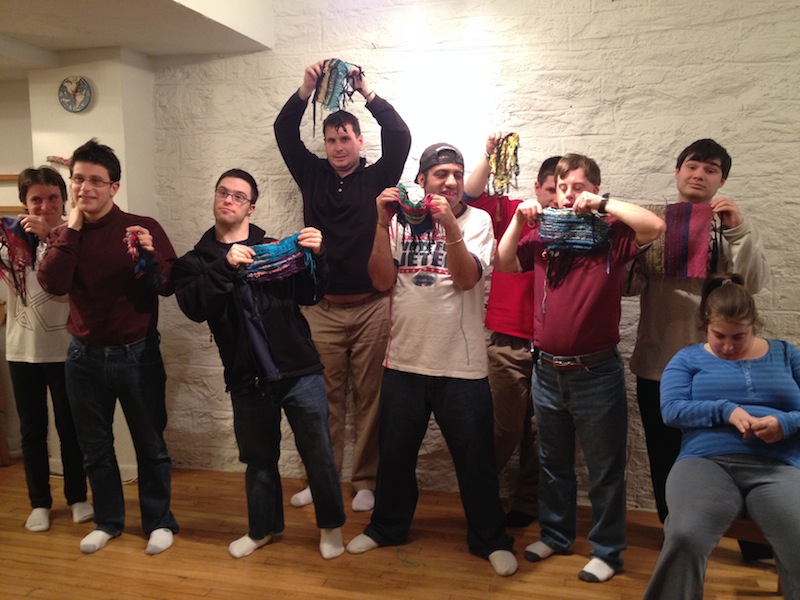 Group of weavers with their work. Photo care of Yukako Satone.

“Misao said, without using an intellectual brain, we can express ourselves through weaving arts,” Yukako explains. “(For) people with mental disabilities, especially autism (…) SAORI weaving is a wonderful tool of self-expression and self-discovering.” Yukako seeks to provide a space for autistic people to express themselves artistically, and with the help of experienced fashion professionals.

In the end, the philosophy of SAORI all boils down to one idea, according to Yukako. “Equality,” she says. “We are all human.”

While this upcoming collaboration event has already been fully funded on Kickstarter, you can still help further the cause.

Spread the word. Consider purchasing the DVD of Misao Jo’s documentary, which Yukako recently edited and subtitled in English, so that even more people can learn about Misao Jo’s philosophy. And why not take a SAORI class yourself? After all — everyone could use a bit more zen weaving in their life.

Delicious Ways To Support The Local Economy While Traveling