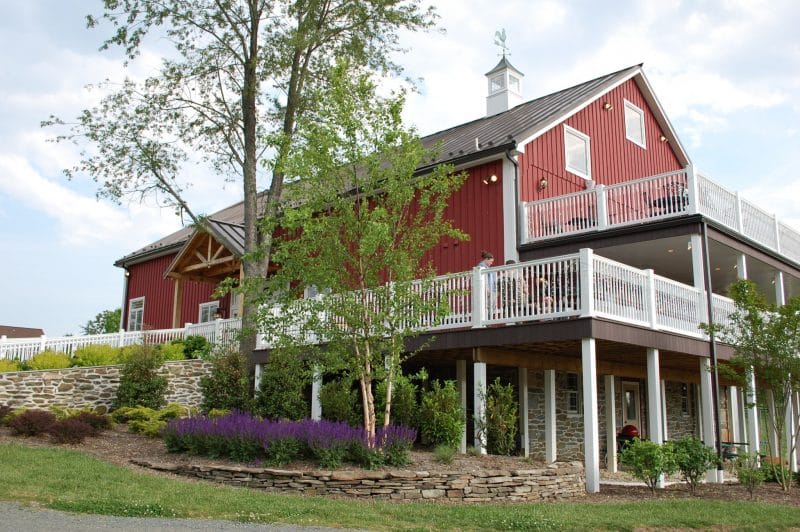 Located in Virginia wine country just an hour outside Washington DC, Sunset Hills Vineyard takes so much pride in their efforts at sustainability that they’ve made it their motto. The owners have modernized a 1870s, Amish-restored barn to “turn sunshine into wine” by covering the roof with 245 solar panels. This system produces 80,000 kilowatt hours of clean power per year, which reduces CO2 emissions at equivalence of planting 240,000 trees. This supplies 100% of the electrical needs for the vineyard and winery. You can even check out the website to see daily power production.

In addition to solar power the vineyard uses spent grape skins as fertilizer, as well as manual labor versus machines to reduce emissions.

Sunset Hills Vineyards recommends trying Virginia’s state grape — Viognier; though if it’s cold out they suggest the “Mosaic.” This red wine is a blend of Merlot and Cabernet Franc and filled with aromas of ripe plum, Indian spices, coffee and nutmeg. 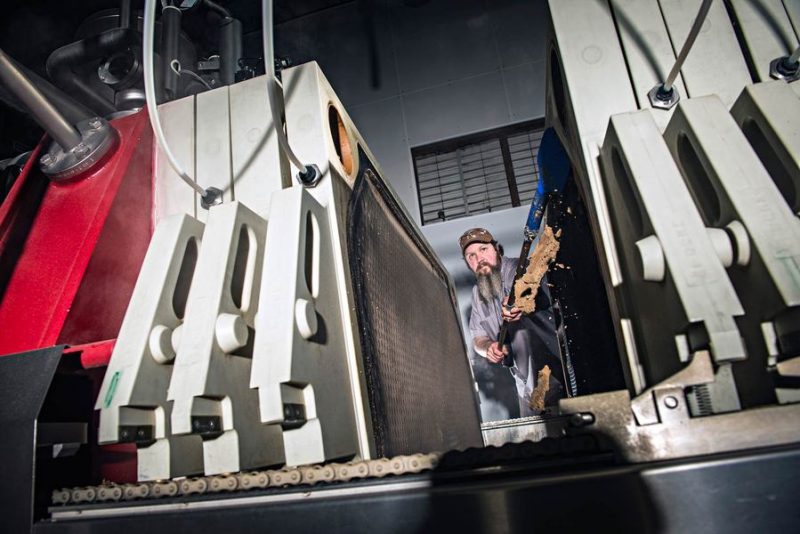 Located in remote Juneau, Alaskan Brewing Co. has designed a brilliant way to craft sustainable beer. Co-founder Geoff Larson, a chemical engineer by training, thought the sawdust-like spent grain might make an effective fuel. Upon finding no device that could burn pure spent grain, he decided to make one.

“Beer Powered Beer” starts with the brewery’s resource-saving Mash Filter Press, which saved more than 1.5 million gallons of water in the first year. It finishes with a patent-pending boiler that uses steam from spent waste to power brewing, decreasing the use of fossil fuels by over 60%. Alaskan Brewing is proud to have been the first American craft brewery to reuse CO2 from fermentation so the gas is not released into the atmosphere.

Alaskan Brewing recommends you try their “Icy Bay IPA,” as 1% of sales benefits their Coastal CODE program to fund coastal and waterway cleanups. Their Brew Crew helps with annual environmental cleanups, including this year’s project in the Juneau wetlands. 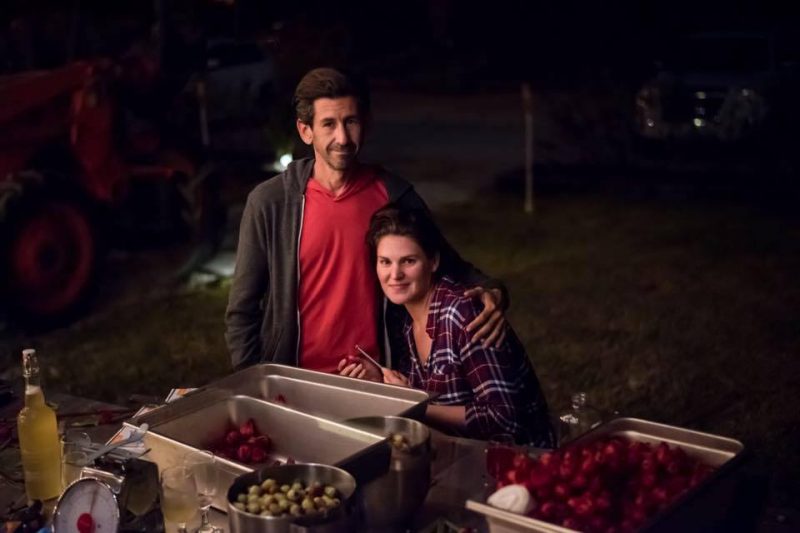 David Bick and his partner Teal created Sons & Daughters Farm and Winery as a place where climate appropriate crops — which need little human intervention — are grown. Wine grapes require a large amount of pesticides to keep healthy, destroying the soil and the environment in the process. After some experimentation with local alternatives, David and Teal discovered Hibiscus Sabdariffa, which ultimately became their favorite source of wine.

The farm utilizes alley cropping, companion planting and manure as fertilizer to ensure the land can be built up again after crops deplete the soil. Their wines are made from fruits like hibiscus, mangoes, bananas, warm weather peaches, figs, honey to promote the bee population, passion fruit, loquats, star fruit and more. Almost everything the winery needs is grown, harvest, fermented, and bottled onsite, thus eliminating any carbon footprint other than their bottles being produced and delivered elsewhere.

Sons & Daughters recommends you try their flagship hibiscus wine, a bubbly pink beverage void of tannins and additives — aka a buzz without the hangover! 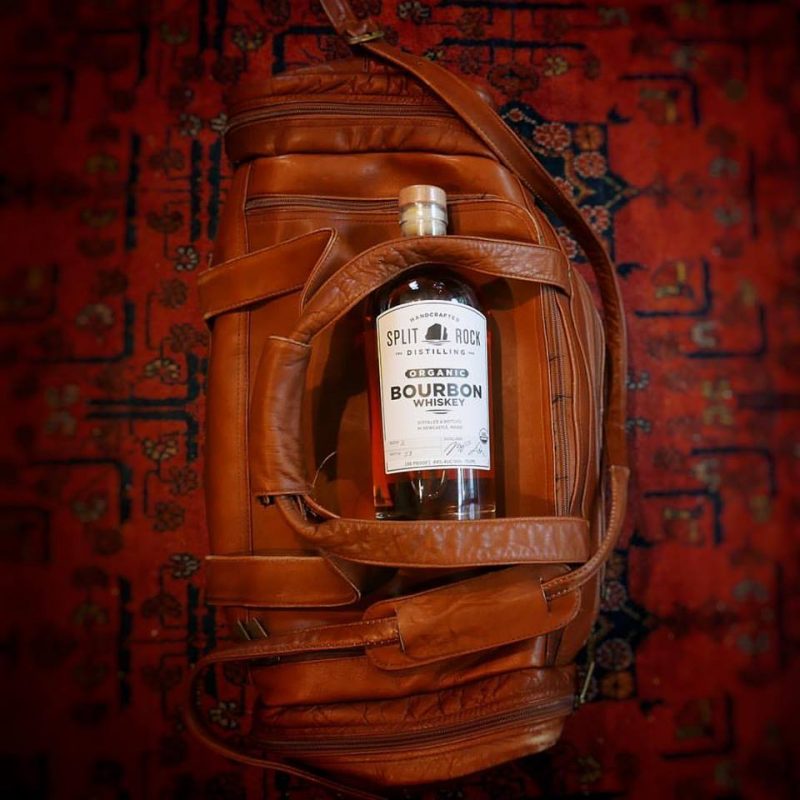 Split Rock Distilling — Maine’s first certified organic distillery — cuts their carbon footprint by reusing and re-purposing as much as possible. Their nutrient-rich mash is fed to heirloom pigs at a local organic farm, the cows at another organic farm eat the grains and and the water slurry is sprayed as compost on the fields.  In addition, Split Rock labels are printed on post-consumer waste papers, they recycle and reuse their bottles, and the tasting room bar is made from salvaged wood. 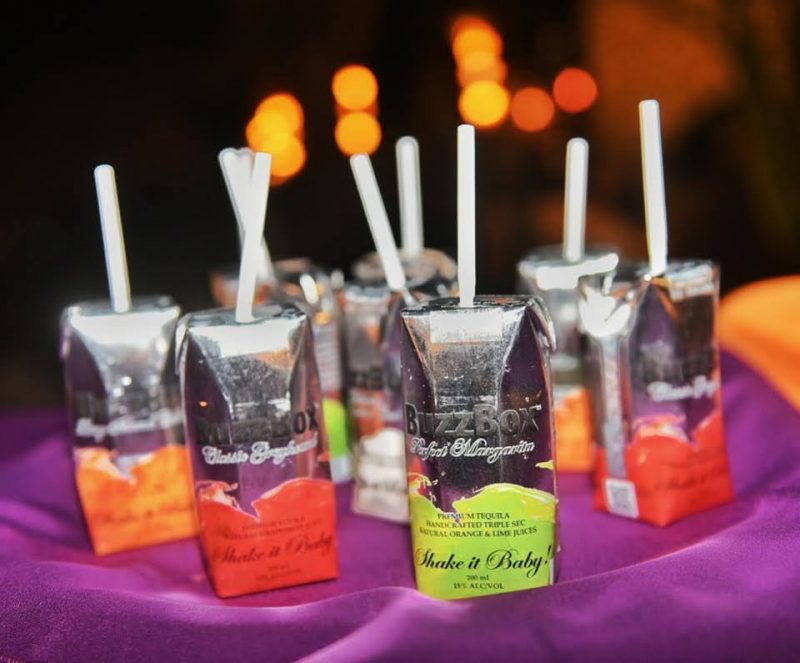 An assortment of Buzzbox beverages. Photo courtesy of Buzzbox.

If you’re a cocktail person, Buzzbox Beverages has created all-natural, ready-to-drink cocktails in recyclable packaging. You can sip the preservative-free libations straight from the box with the attached straw or pour them over ice, using the spout. The lightweight packaging makes transportation easy on the environment, meaning 40-50% less trucks can deliver the same amount of liquid compared to traditional bottles, according to the company. 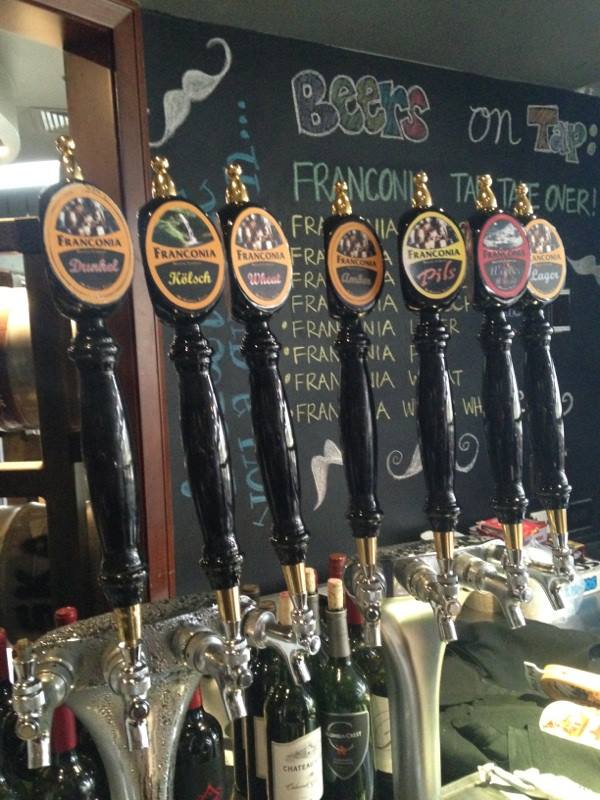 6) So Green They Don’t Need A Dumpster At Franconia Brewery (McKinney, Texas)

Franconia Brewery has eliminated all waste that would end up in a landfill — meaning they don’t even have a trash dumpster. The brewery is 100% “off grid,” collecting rainwater for the sustainable beer, using a solar array to power the entire facility and donating their mash to Koster Cattle Company for cattle feed. And because they target local consumers their transportation emissions are reduced. 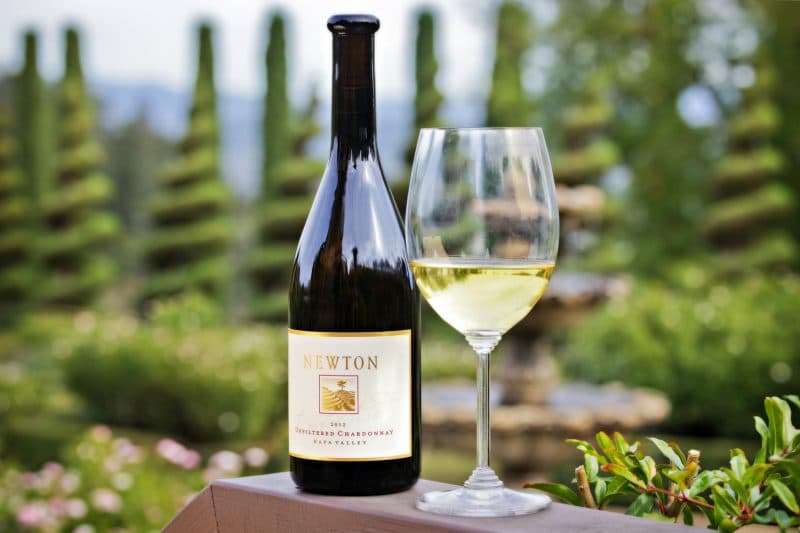 Newton Vineyards’ farming practices foster a symbiotic relationship between the vines and the environment. It works like this: they plant a cover crop in the vineyard to reduce soil erosion and enhance soil fertility. After every harvest, they collect and compost grape skins, stems and seeds to be used as a natural fertilizer and soil builder in the vineyards. All glass, cardboard and plastic waste generated onsite is recycled.

The vineyard is strategically designed for sustainability, too. Their system of ponds capture and store rain water during winter months for summer irrigation. They also use an elaborate three-layer cave system to mature their wine in barrels. Additionally, a rooftop herb and rose garden insulates the fermentation room and maintains cool temperatures.

Newton Vineyard recommends their “2014 Unfiltered Chardonnay,” which was 100 percent barrel-fermented using indigenous yeasts. The wine was then aged for 12 months in French oak barrels, hand-stirred weekly to re-suspend the sediment and add complexity. What starts out as pink grapefruit and fresh figs with some spice slowly transforms into lemon curd and white peaches on the palate. 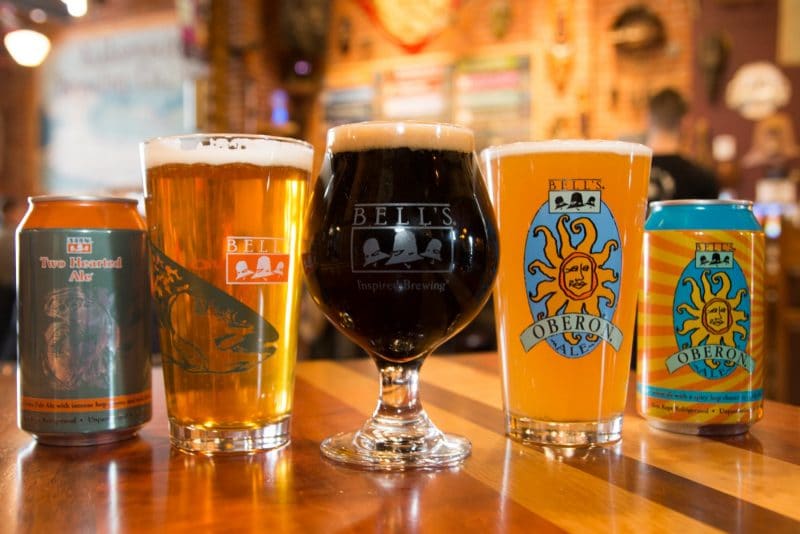 Bell’s Brewery reduces their impact in numerous ways, for example, using a sedum green roof to decrease the amount of absorbed heat, thus reducing the need for air conditioning. Additionally, their Bio-Energy Building processes over 100,000 gallons of wastewater daily, converting pollutants into renewable energy for use at the brewery.

Beyond production, Bell’s engages their employees with sustainable incentives, like a Community Supported Agriculture (CSA) participation partnership with local Avalon Farms, and installing bike racks to promote green commuting. They also have an Adopt a Highway program where Bell’s employees pick up roughly 50-60 bags of highway trash three times a year. 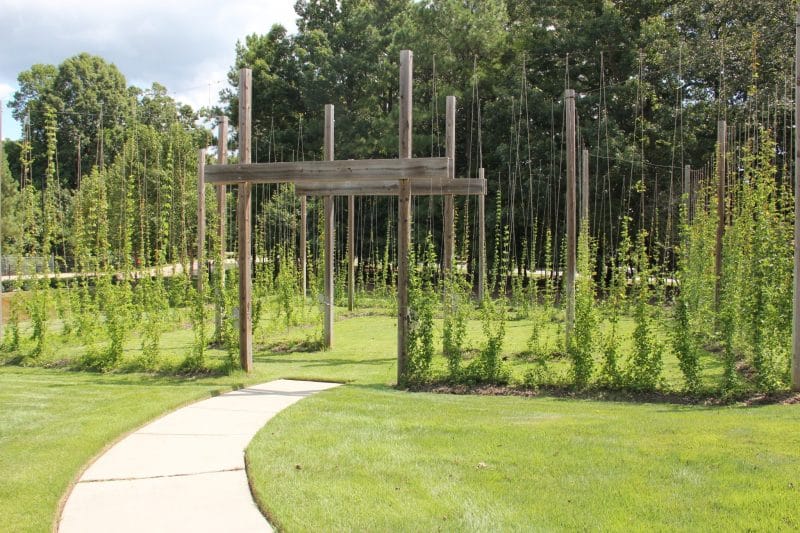 Mims Distributing — who distribute sustainable wine from the eco-passionate Left Coast Cellars in Oregon —  do much to show love to the environment. First off, their space features solar panel roofing to reduce the building’s power consumption up to 400 MWh/year and offsetting approximately 40% of the company’s energy needs. They also use a smart storm water retention strategy to minimize water consumption, and supply employees with only recycling bins to help them re-think their trash habits. Their bar is crafted from recycled glass, and motion-sensing lights in all rooms keep energy usage low.

Don’t miss their annual volunteer litter cleanup event called Canoes For a Cause. 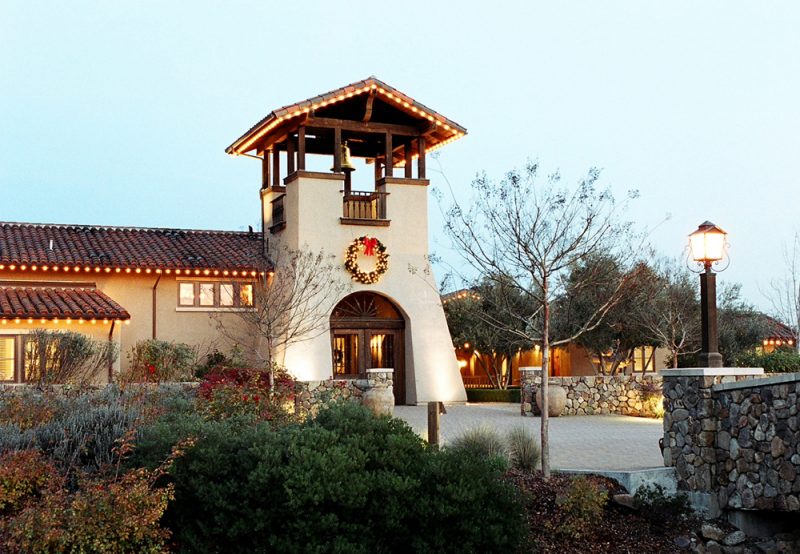 To St. Francis Winery & Vineyards water conservation is key, so they track moisture levels to only irrigate in targeted areas when absolutely necessary, often with cleaned winery wastewater.

St. Francis recommends their two most popular wines: the “2013 Old Vines Zinfandel, My Father’s Vineyard, Dry Creek Valley” and the “2013 Cabernet Sauvignon, Lagomarsino Vineyard, Russian River Valley,” both of which received a score of 95 from Robert Parker. 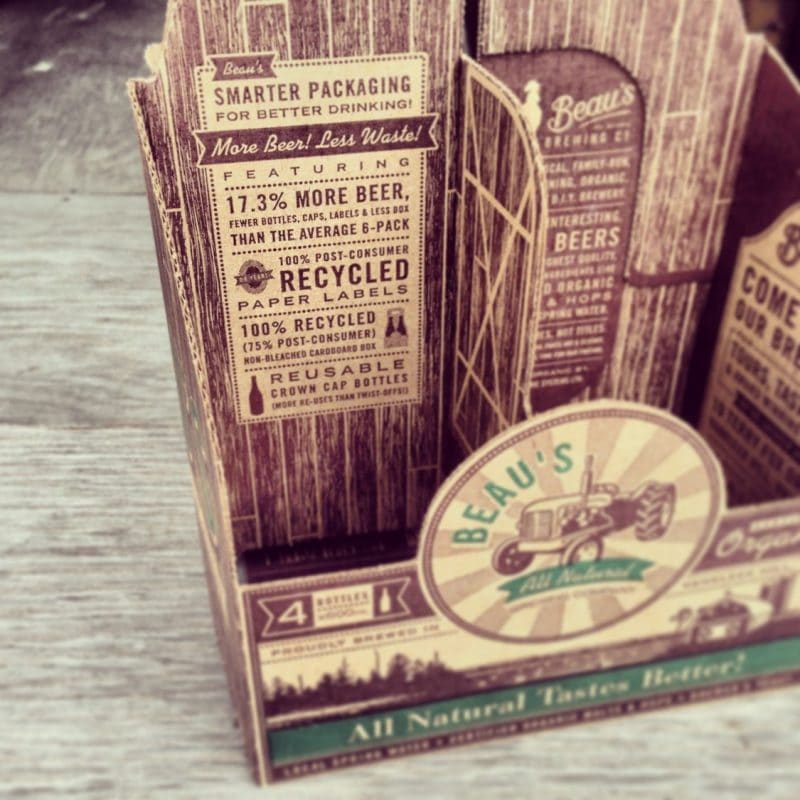 Beau’s All Natural Brewing has been making 100% certified organic beer for over a decade, powered by 100% natural gas and electricity from green energy provider Bullfrog Power. When launching their bottle sales in 2008, they debuted unconventional 4-packs offering 17.3% more beer than a typical 6-pack, with significantly less packaging waste. Additionally Beau was one of North America’s first breweries to use 100% recycled labels, and now use them for almost all of their marketing materials.

The brewery works with the community as well, encouraging local hops farmers to go organic, funding solar arrays at local farms and contributing no interest loans to the Ottawa Renewable Energy Co-Operative to speed up renewable builds. As for employees, they’re incentivized to carpool, bike and walk to work as well as participate in organic farm shares. 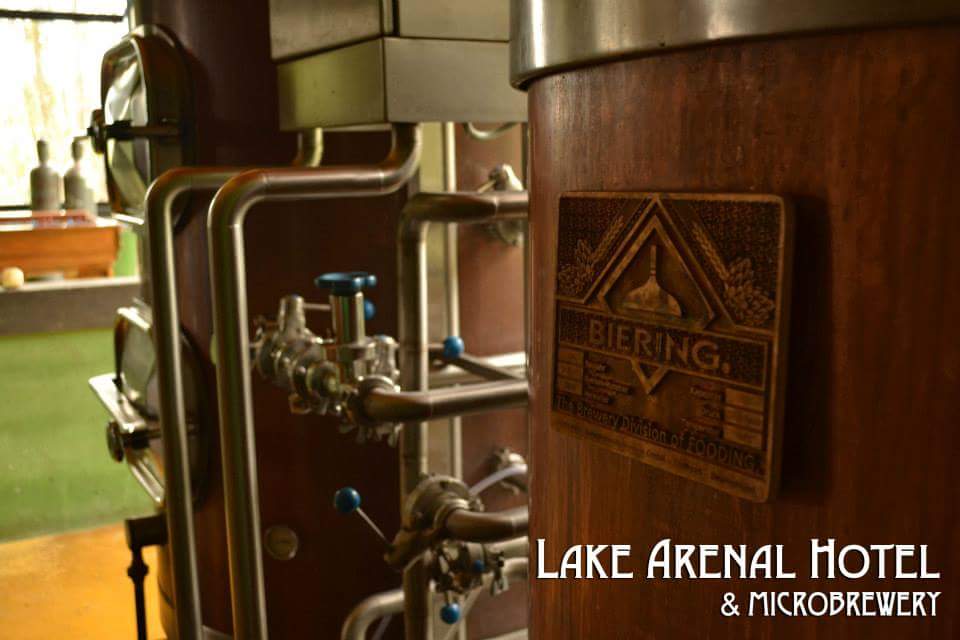 Sustainability is a way of life in Costa Rica, a country aiming to be the first carbon neutral country in the world by 2021. This goal is assisted by Lake Arenal Brewery (LAB), which runs on 100% solar power produced on their rooftop. To make their unfiltered, unpasteurized ales they use gravity-fed virgin jungle spring water from a protected forest around Tenorio Volcano. Additionally, their spent grain feeds animals on their dairy and pig farm, where a biodigester turns animal waste into methane cooking gas and fertilizer. In terms of the future, they’re working to replace their diesel-fueled boilers with solar hot water heaters and biodiesel.

Lake Arenal Brewery recommends you try their “Chili Birra,” made from a classic golden ale base and infused with chiles campana straight from the hotel garden. This beer captures the delicate flavor of a hot chili without the spiciness.

What’s your favorite sustainable beer, wine or spirit? We’d love to hear in the comments below! 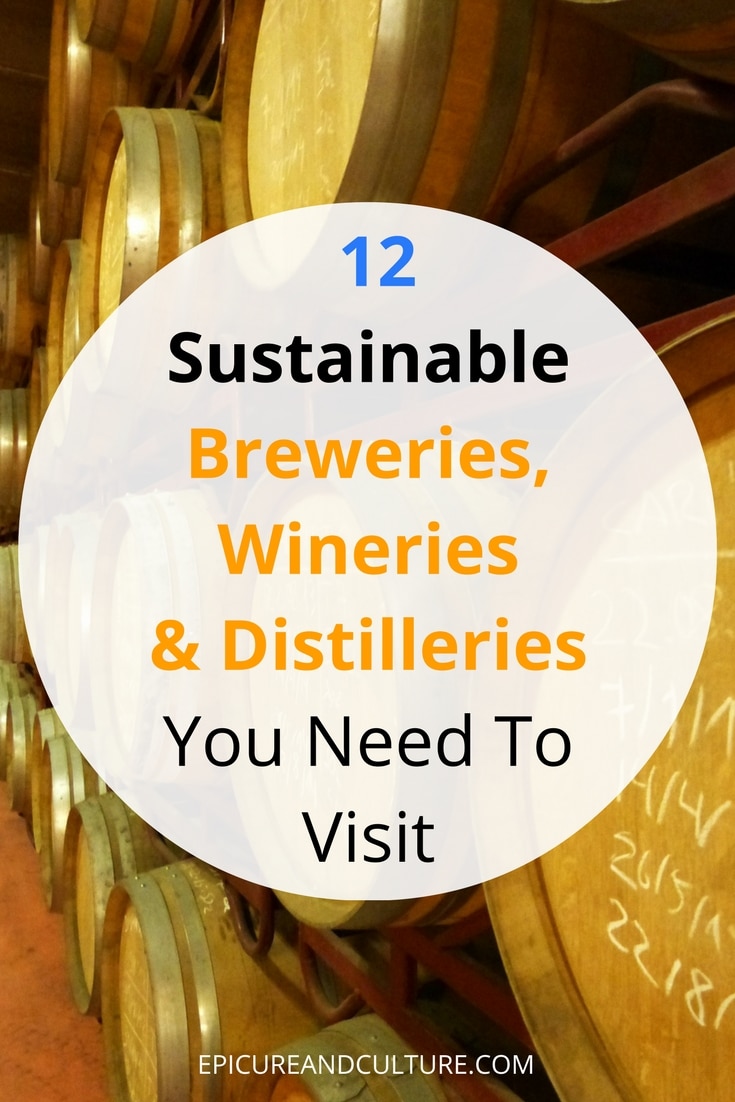 Katie Foote may be a physicist by trade but she spent several years travelling the world as much as possible. After four years of semi-nomadic life, she spent a couple years in Auckland, New Zealand and recently moved to Vancouver, Canada. Despite living more traditionally, she has insight on how to travel the world on a graduate student budget (cheap!), explore off-the-beaten-path destinations and authentically experiencing new places by connecting to locals. When she's not doing physics or globe-trotting, she likes kickboxing, yoga and exploring her extraordinary new backyard of British Columbia.